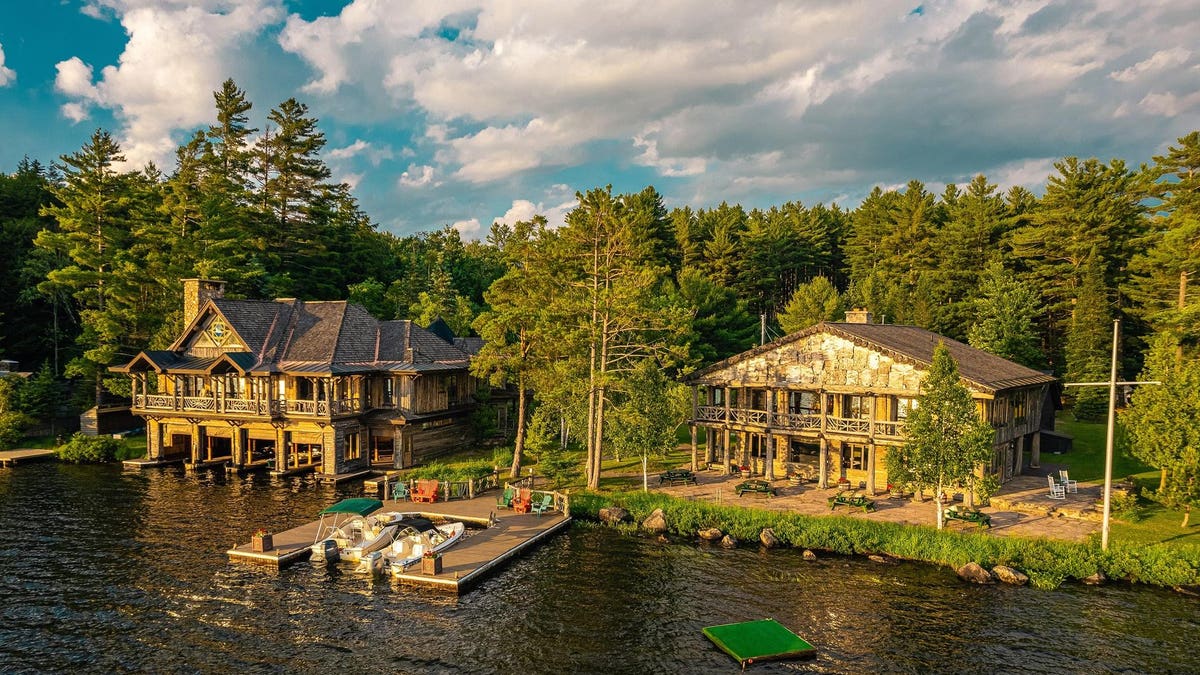 Suspended in a place and time when old money was new is a luxury compound along the elite Upper St. Regis Lake in New York that is going up for auction.

Known as Camp Limberlost, the storied and iconic property valued at $10 million will be sold by Platinum Luxury Auctions on August 14 without reserve, meaning the estate will go to the highest bidder no matter the price. Concierge Auctions and Engel & Völkers are facilitating the sale of the auction online.

Previously listed at $10.2 million, the historical camp on upstate New York’s most prestigious lake was a summer playground where the richest and most powerful families like the Rockefellers, Vanderbilts, Pratts and Whitneys gathered to reconnect with nature. Upper St. Regis Lake is also a popular presidential vacation spot.

Camp Limberlost is just three doors down from the Pine Tree Point estate of Frederick Vanderbilt, who was director of the New York Central Railroad for 61 years. The site offers one of the best vantage points on Upper St. Regis Lake with a western exposure overlooking Birch Island and St. Regis Mountain.

But there’s much more than lakeside enjoyment at play. Five Adirondack-style homes comprise Camp Limberlost: the main house, Donaldson House, Highland House, Guide House and a two-bedroom apartment ideal for a caretaker. An additional hilltop building site overlooking the cove is also ready for the construction of an additional estate.

The unique structure of the camp allows large families, or multiple families, the ability to socialize while maintaining their privacy. The highlight of the camp, however, is the modern two-story boathouse built in 1989 when the majority of the camp was completely renovated.

This impressive structure offers central air-conditioning, a four-person elevator, four heated boat bays, a dramatic two-story foyer with a hand-carved wooden staircase and a massive second-story great room with a fireplace, wet bar and vaulted ceiling capable of hosting lakeside dinner parties for up to 90 people.

Other buildings include an authentic trapper’s cabin with a wood stove, pioneer lean-to, canoe house with a covered slip and a Caterpillar industrial 120kW generator house for power backup.

Trayor Lesnock, founder and president of Platinum Luxury Auctions, said much of the property was professionally renovated from 1989 to 1990, but three smaller houses and the canoe house still maintain much of their original Adirondack camp character. The waterfront boathouse and main residence are the property’s most modernized structures.

An added benefit: sublime sunset views. “The western exposure provides a lengthy view corridor down a broad portion of the lake, in addition to views of Birch Island and St. Regis Mountain,” said Lesnock. “It makes for spectacular sunsets.”

Camp Limberlost has only changed hands twice in the last 100 years, making this offering an extraordinary opportunity for the next family to create their own special generational retreat.

“The owners established many traditions and built a rich catalog of memories by hosting big family events throughout the years, and it’s likely another family will purchase the camp with the same intent,” said Trayor. “Many younger families – with parents in their 40s and 50s – have been purchasing these camps and lake homes in recent years.”

The current owner, Eric Rhoads, said the tranquility of the property soothed his father’s soul.

“When the movie On Golden Pond came out, my dad had just been placed on the Forbes 400 list,” he explained. “He was running over 50 companies with over 30,000 employees. His life was filled with stress and constant meetings.”

When visiting New Hampshire, Rhoads’ father asked a gas station attendant if he knew of any lakes that met his criteria: tranquil, no jet skis and a mountain view with islands in the view.

“The attendant told him that he used to date a girl whose parents lived on such a lake and that the home had never changed hands,” said Rhoads. “It had been in the family for over a hundred years. There was a rumor that they might be selling, so dad asked him to call them from a pay phone.”

The property had just sold, but Rhoads’ father discovered the buyers had not closed because of a dispute over keeping a piano.

“Understanding that this was the first property to be sold on the lake in 50 years, he bought the property sight unseen without even asking the price,” said Rhoads. “He saw it for the first time after closing, and it was better than expected, and when he bought Limberlost, we got our old dad back and reconnected as a family.”

To this day, Rhoads considers Camp Limberlost one of the most magical places on Earth. “My kids have spent every summer of their lives here,” he said. “I can honestly say there is no lake in America with such rich history, such classic Adirondack style, and such a deep sense of community and tradition. We have the oldest yacht club in America and still sail boats designed for this lake 120 years ago.”

He added, “The social life can keep you busy every night if you want, and I love touring the lake with friends, talking about history and pointing out the families still on the lake with names like Rockefeller, Vanderbilt, Reed, Post and Pratt, as well as those representing today’s biggest companies and tech brands. Whoever ends up with Limberlost is striking gold.”