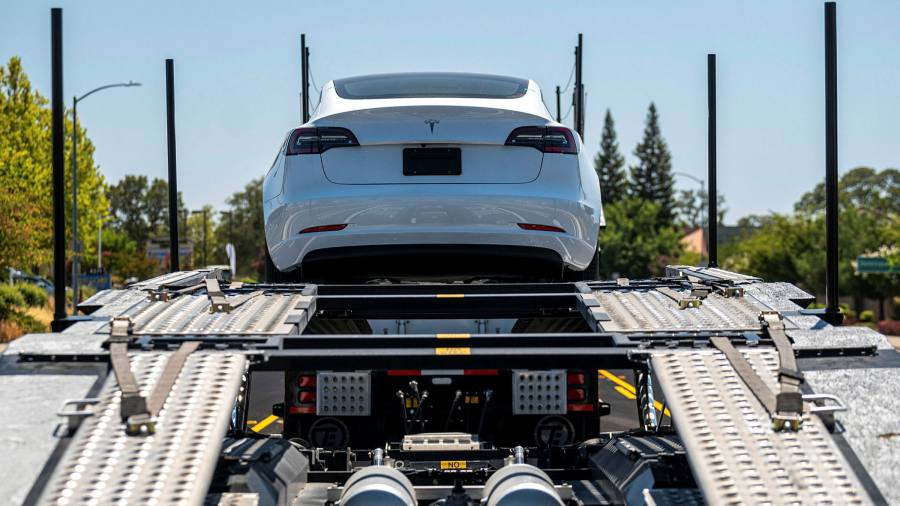 Joe Biden will catapult his climate change agenda on Thursday by signing an executive order calling for half of all new vehicles sold in the US to be electric by 2030 as part of plans to slash transport emissions.

The US president will announce the target as he lays out plans to reinstate and toughen aggressive Obama-era rules on fuel efficiency and vehicle emissions that were gutted by former president Donald Trump.

The world’s second-largest emitter of greenhouse gases has lagged behind China and Europe in the take-up of electric vehicles. In the US they comprise about 2 per cent of the market and Tesla dominates sales, against about 6 per cent in China, 10 per cent in Europe and 11 per cent in the UK.

Senior US administration officials said that while the 50 per cent target would not be enforceable, it would provide a market signal that would push carmakers towards electrification.

Biden came to office with ambitious plans to tackle climate change. By the end of the decade he wants to cut the country’s greenhouse gas emissions to half of what they were in 2005, with the aim of reaching net zero by 2050.

Transport accounts for about 29 per cent of US emissions, more than any other sector, making addressing it central to any plan to cut greenhouse gases.

As he makes the announcement, Biden will be accompanied by representatives from carmakers Ford, General Motors and Stellantis, which comprises Fiat Chrysler and France’s PSA. Each will announce their own targets for 40 per cent to 50 per cent of their sales to be zero-emissions vehicles — which includes battery-electric plug-in, hybrid electric and fuel cell electric vehicles — by the end of the decade.

GM said in January that it would aim to stop manufacturing petrol-powered cars in 2035, the first of the world’s big carmakers to set a target. Ford said in May that 40 per cent of its global car sales would be electric by 2030.

GM and Ford plan to spend billions over the next four years to produce electric vehicles designed to appeal to American consumers’ preference for trucks and sport utility vehicles.

Legislation being considered by Congress includes allocating $7.5bn to build out America’s electric vehicle charging infrastructure, though that is short of the investment the president had called for in order to build a network of 500,000 charging points nationwide. There are about 54,000 public and private charging stations in the US at present.

The United Auto Workers backed the plan, noting the US needed to invest in electric vehicles to avoid falling behind China and Europe, but said it must be paired with a commitment to “not just . . . retaining good union jobs, but growing them” as the industry moves to electric vehicles.

Electric vehicles have fewer components and a less unionised supply chain, meaning the transition has the potential to eliminate jobs and undercut wages and benefits in the auto industry.

Alongside the president’s executive order, the Environmental Protection Agency and the National Highway Traffic Safety Administration will on Thursday announce details of new standards on both fuel efficiency and tailpipe emissions out to 2026, as well as plans to tighten these in following years.

The administration of then-president Barack Obama imposed standards mandating an average fuel efficiency of 54.5 miles per gallon by 2025. The Trump administration eased that to 40 mpg by 2026.

The move to reinstate the standards was long-anticipated after Biden, in one of his first moves in office, ordered the EPA and NHTSA to revise the Trump era rules by July — a deadline the agencies missed — as part of his broader push to slash the country’s emissions.