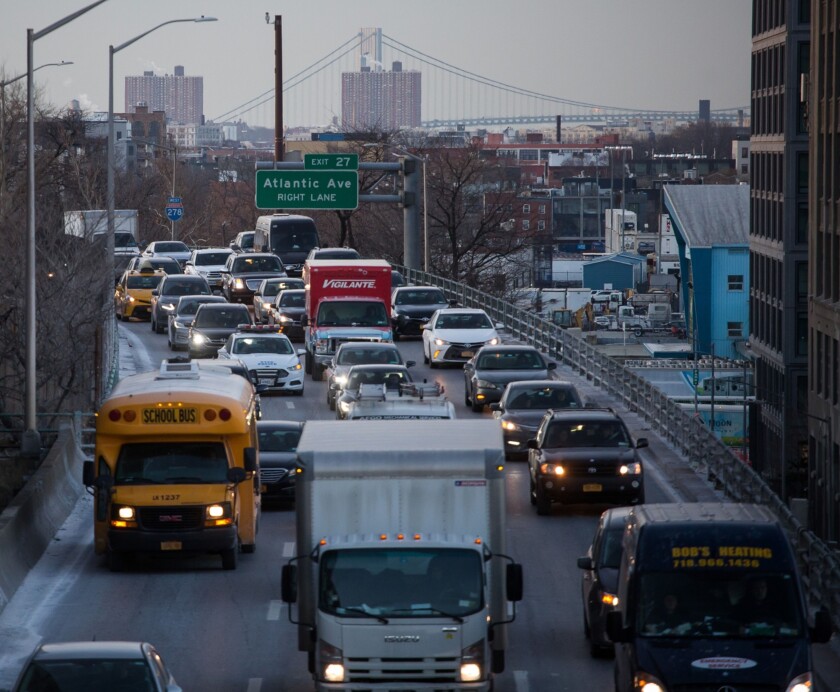 Late in the fourth quarter of his tenure, New York Mayor Bill de Blasio has punted on a fix for the 70-year-old Brooklyn-Queens Expressway.

The mayor last week, without mentioning any cost or funding mechanism, announced a plan to keep the city-owned 1.5-mile crumbling, layer-cake triple cantilever from Sands Street to Atlantic Avenue in Brooklyn for two more decades.

The road is part of Interstate 278, which snakes throughout New York’s outer boroughs, from Staten Island across the Verrazzano Bridge to the Triborough Bridge in Astoria, Queens en route to the U.S. mainland. Brooklyn has roughly 2.5 million people and little interstate highway access.

While sidestepping estimates on costs that figure to run in the billions, de Blasio and city transportation Commissioner Hank Gutman said their four-part plan focuses on preserving the structure; immediate and ongoing maintenance; expanding monitoring and enforcement; and developing a “long-term, community-based vision” for the entire corridor.

“It’s not a simple problem,” Moss said. “Sometimes not every problem has a neat solution.”

Alternate proposals have ranged from city Comptroller Scott Stringer’s call to ban trucks on the BQE — which is clogged by truck traffic — to City Council Speaker’s proposal to build an $11 billion tunnel. Both politicians are winding down their terms.

“Both proposals were ludicrous,” Moss said.

The involvement of the adjacent and affluent Brooklyn Heights neighborhood and their attachment to a pedestrian promenade that overlooks Manhattan and is baked into the highway construction itself have added a longstanding visceral element.

City officials three years ago had to withdraw a previous proposal to knock down the promenade and then rebuild it.

The cantilever structure itself was a Plan B for the autocratic 1950s master builder Robert Moses, who got unexpected pushback when he tried to force a six-lane highway through Brooklyn Heights after bulldozing homes in Carroll Gardens and Sunset Park.

“There is no solution that can bring you peace,” Moss said. “This is a highly contested because the people who live nearby are intelligent, politically active and savvy, and affluent.

“Sometimes we have to realize that that New York City is more than Brooklyn Heights and DUMBO. We’ve got a lot of other priorities as well.”

DUMBO is an acronym for Down Under the Manhattan Bridge Overpass, like Brooklyn Heights a wealthy neighborhood.

Essentially, the albatross project will be in the lap of the next mayor. Democratic Brooklyn Borough President Eric Adams is a heavy favorite over Republican Curtis Sliwa in November.

Crumbling roadways are also central to the debate over a federal infrastructure bill.

“We’re not the only city with a hulking, 70-year-old crappy interstate that we’re trying to figure out what to do with,” former city Transportation Commissioner Polly Trottenberg told reporters after a City Council transportation committee oversight hearing in February 2020, shortly before the COVID-19 pandemic escalated and put BQE discussions on hold.

Stringer last week called the scaled-down proposal “a positive first step toward ending the harmful legacy of this roadway and finally creating the flexibility and space to comprehensively reimagine a pedestrian-friendly transit and infrastructure network for the future.”

Some of the recommendations stem from a report two years ago by think tank Regional Plan Association, according to its president and chief executive, Tom Wright.

“The important steps outlined follow the diligent work of the mayor’s experts’ panel and will allow for a thoughtful long-term plan for the BQE which responds to the changing nature of work, travel, commerce and climate change.”

How the BQE integrates with a congestion-pricing mechanism for Manhattan south of 60th Street, and which still needs federal approval, is uncertain, Moss said. Officials say the mechanism could reduce traffic generation while generating $15 billion annually for mass transit through bonding.

“Some people think it will put more traffic into the tunnels. That’s a great question but we don’t know the answer to that yet,” Moss said.

Depending on implementation, RPA said, congestion pricing could remove enough cars and trucks from the relevant section of the BQE to enable a four-lane highway to accommodate remaining traffic.