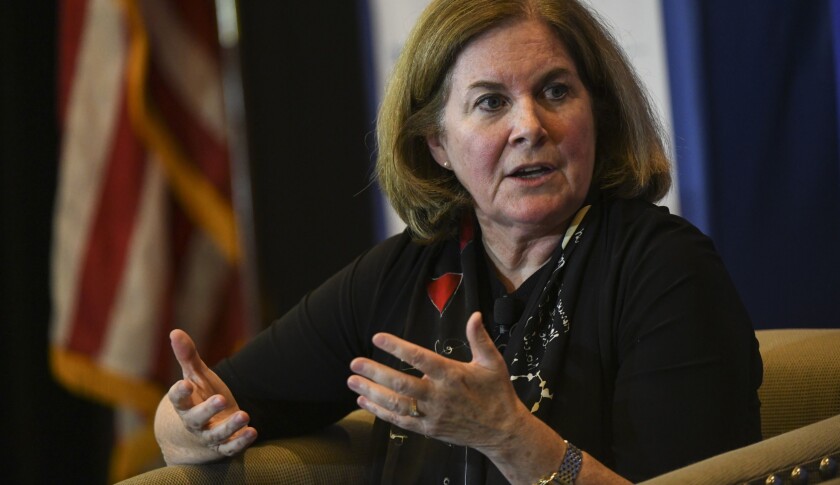 “Now, with the recovery underway, a transition from extraordinary monetary policy accommodation to more neutral settings must follow,” George said in the text of a virtual speech to the National Association for Business Economics Wednesday. “Today’s tight economy as I described earlier certainly does not call for a tight monetary policy, but it does signal that the time has come to dial back the settings.”

Fed officials began debating when and how they should taper asset purchases at their July meeting. The Fed is currently buying $120 billion of assets per month — $80 billion of Treasury securities and $40 billion of mortgage backed debt — and has pledged to keep up that pace until “substantial further progress” has been made toward its goals of maximum employment and 2% inflation.

George, who doesn’t vote on monetary policy this year, suggested she believed the “substantial” progress has been achieved or was very near.

“While recognizing that special factors account for much of the current spike in inflation, the expectation of continued strong demand, a recovering labor market, and firm inflation expectations are consistent, in my view, with the committee’s guidance regarding substantial further progress toward its objectives,” she said. “I support bringing asset purchases to an end under these conditions.”

The Kansas City Fed leader said she was pleased with recent payroll gains, including 943,000 jobs last month, while adding that “structural changes” to the labor market may affect how to assess the point of full employment. While the unemployment rate dropped to a pandemic low of 5.4%, that’s far above the 3.5% mark achieved before Covid-19. Payrolls remain 5.7 million short of pre-pandemic levels.

“While it is clear that we remain far from the historic low levels of unemployment achieved pre-pandemic, it is less clear to me that such a benchmark will be the best guidepost in the current expansion,” George said.

George noted there are risks from the emergence of the delta variant, which could make consumers more cautious. It could also have an impact on supply chains, she said.

Responding to audience questions, George said policy makers need to be focused on risks to financial stability, including elevated asset prices. While she cited “froth” in the outsize gains in U.S. house prices, she cited some signs of normalization there.

“We have begun to see some of that backing off,” she said. “I am more encouraged when I see underwriting standards, at least in the residential markets, have continued to hold pretty well.”

There is no mechanical connection between tapering asset purchases and raising interest rates, George said. The Fed has pledged to keep its policy rate near zero “until labor market conditions have reached levels consistent with the committee’s assessments of maximum employment and inflation has risen to 2% and is on track to moderately exceed 2% for some time.”

“One might argue that today’s inflation dynamics are likely to keep inflation moderately above 2% for some time and align with the committee’s threshold criteria,” George said. “On the other hand, the criteria for judging maximum employment are murkier.”

In a separate speech, another Fed president, Atlanta’s Raphael Bostic, said the Fed’s policy committee would not preemptively raise rates in response to a “hot” labor market, out of fear over subsequent inflation.

“Obviously, we have seen inflation rise above 2% as the economy recovers from the pandemic downturn,” Bostic said. “But most of that rise is fueled by forces that should recede over time. So, I expect price inflation to average close to our target over the longer term.”

Ciena (CIEN) and Carrols Restaurant Group (TAST): 6/18/2019 Bull & Bear
Connecticut’s fiscal 2023 revenue estimate gets a boost
Fed can shrink reserves by $2 trillion without missing a beat: Waller
The first ETF is 30 years old this week. It launched a revolution in low-cost investing
Biden administration rolls out a blueprint for a ‘renters bill of rights’ – Here’s what it includes