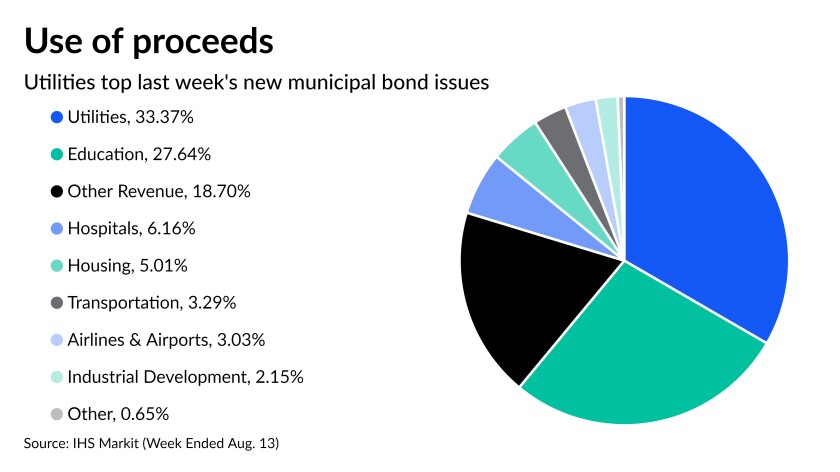 Municipals were steady on Monday as New York City took orders of over $110 million on the first day of a two-day retail order period for $1.039 billion of general obligation bonds. Investors prepared for a week that will see nearly $10 billion of new volume come to market.

Utilities saw the top use of proceeds from the municipal bonds that were sold last week, according to IHS Markit It was followed by education and other types of revenue bonds.

“It’s been really lethargic in the last few weeks, with a drift in the long end of the market, but today you have a 10-year [Treasury yield] back to a 1.25% from as cheap as 1.36%,” a New York manager said Monday morning.

He called the first day of the NYC retail order period a “good start” on a sleepy summer Monday that was “right on track” for retail investors, many of whom have had some sticker shock at the current municipal rates.

The deal is part of the $9.76 billion on tap in the primary market this week, largely dominated by New York paper.

The manager said the market was steady, but tentative Monday, with strong demand expected for the NYC GOs, as well as for the New York Liberty Development Corp. (/A/A-/) sale of $1.225 billion of 4 World Trade Center Project tax-exempt liberty revenue refunding green bonds on Wednesday. Goldman Sachs is the senior book-runner.

Cash-flush investors should be eager to take advantage of the flurry of supply as summer nears end, the manager said — if they can swallow the current lackluster yield levels.

All substantially sized deals have done well lately as there is a lot of money circling in the market in August, he noted.

But, at the same time, he said the market technicals aren’t as attractive as investors would like.

For example, municipals in five years are yielding 48% of the comparable Treasury yield, which he said is “not overly attractive.”

Sweet Big Apple deal
Investors showed their interest in fresh New York paper as the city launched the first of its two-day retail order period — on the heels of a positive outlook change by Fitch Ratings on Friday.

Fitch moved up the city’s GO outlook to stable from negative ahead of its sale, which should add to its already strong appeal with investors, according to the New York manager.

With over $110 million spoken for as of close of trading Monday, the retail order period continues on Tuesday.

The outlook upgrade “definitely helped” and follows in line with a trend of positive outlook revisions by rating agencies lately in an adjustment period as the second year of the COVID-19 pandemic progresses, he said.

He said he didn’t expect the city’s deal to be affected by the growing concern over the Delta variant — even though the deal is being priced the same week as the city begins requiring proof of COVID-19 vaccinations to use public places, such as indoor dining, gyms, sports venues, and museums.

“With the care package the government is committed to helping everyone — and that helps creditwise and makes people more comfortable,” he said.

Tapering
As the markets remain focused on when the Federal Reserve decides to taper asset purchases, one analyst says liftoff will be more dramatic for the markets.

“The announcement of tapering is unlikely to create a large shock in the market, though the U.S. Treasury curve should eventually steepen again,” said Sebastien Galy, senior macro strategist at Nordea Asset Management. “The market simply had a long time to prepare for tapering. The real shock will come when the debate on a cycle of Fed rate hike starts.”

While many thought next week’s Jackson Hole symposium would shed more light on tapering, that is no longer the case, as the spread of the Delta variant of COVID-19 combined with the high number of unemployed keeps the Fed in a wait-and-see mode.

“The reason the market is so concerned about the Federal Reserve tapering its bond purchases is that it could start to reverse the many gains of quantitative easing at a time when many assets are expensive and leverage elevated,” Galy said. “The example of the temper tantrum in 2013 is also disconcerting, but the reality now is more complex.”

While tapering could curb growth, he said, “the real problem for growth and any highly leveraged and expensive asset class is when Fed expectations of raising rates start to significantly ramp-up,” which is expected next year.

And while much of the inflationary pressures should prove transitory, Galy added, “wages and rents are likely to be a persistent pressure.”

December seems to be the new expectation for a taper announcement, according to Morgan Stanley.

“Rising concerns over the Delta variant and increased angst around inflation are not enough to slow the Fed’s march toward tapering,” Ellen Zentner, Morgan Stanley Chief U.S. Economist, wrote in a note. Labor market gains, “updated forecasts, and nascent signs of cooling inflation, we think, keep the FOMC on track to announce the taper at its December meeting.”

But, others think taper hints will come next week. “With mounting evidence of sustained robust activity … at the upcoming symposium in Jackson Hole, Chairman [Jerome] Powell will likely be compelled to drop a stronger hint, if not outright specify, that tapering is on the way,” said Stifel Chief Economist Lindsey Piegza

Meanwhile, Cato Senior Fellow and Director of the Center for Monetary and Financial Alternatives George Selgin applauded those fed president ready to start tapering. “Those purchases have outlived their purpose of stimulating employment and supporting prices during the COVID-19 crisis,” he said. “Moreover, it makes little sense for the Fed to continue creating bank reserves at the present rate while simultaneously reducing them through its overnight reverse-repo program, where over $1 trillion in former reserve balances — roughly half of those created by the Fed’s COVID-19 purchases — are now parked.”

And with the Fed having just established a standing repo facility, Selgin said, it’s “unlikely that even relatively aggressive tapering will result in a ‘taper tantrum’ of the sort that erupted back in 2013.”

Friday’s July employment report and the June JOLTs report “clearly suggest that the Fed’s criteria of ‘substantial further progress’ has been achieved and is no longer ‘a ways off,’” said Berenberg chief economist for the U.S., Americas and Asia Mickey Levy.

The only indicator released on Monday, the Empire State Manufacturing Survey, suggested slowing growth in the region, as the general business conditions index plunged to 18.3 in August from 43.0 in July.

Summer strength ahead of potential fall risks
The summer months have been underscored by a favorable supply and demand backdrop, but that could potentially transition into a defensive posture in the fall should elevated risks arise, according to a new report from BlackRock analysts Peter Hayes, head of the Municipal Bonds Group, James Schwartz, head of municipal credit research and Sean Carney, head of municipal strategy.

Municipals maintained their seasonal trend and posted strong performance throughout the month of July, the analysts noted in Monday’s report.

“The market benefited from a favorable supply-demand backdrop and rallying interest rates due to excess liquidity, short covering, and Delta variant fears,” they wrote. “Tight credit spreads and rich valuations once again acted as a drag, spurring modest underperformance versus comparable Treasury bonds.”

Supply moderated from the robust levels experienced in June and trended more in line with historical expectations, the team explained. Issuance of $35 billion was down by 26% month-over-month, but just 5% above the five-year average — bringing the year-to-date total to $255 billion, according to the report.

Taxable issuance accounted for 27% of supply, the highest level since February, as lower interest rates made advance refunding tax-exempt debt in the taxable municipal market “more economical,” they noted.

As a result, reinvestment income from maturities, calls and coupons “significantly outpaced” tax-exempt issuance and provided a strong technical tailwind, according to Hayes, Schwartz, and Carney.

“While fund flows slowed slightly into month end amid lower absolute yields, 2021 remains on pace to eclipse 2019 as the best fund flow year on record,” they said.

Looking ahead, the analysts expect the market will continue to benefit from a near-term supply-demand imbalance. “However, given recent performance strength and current stretched valuations, we anticipate monetizing some of our gains in August, ahead of the less favorable seasonal trends and increased event risks in the fall.”

Muni benchmarks
The triple-A benchmark scales were unchanged in light trading on Monday.

In late trading, Treasuries were stronger while equities were mixed.

Primary market
Other larger deals set for pricing this week include: