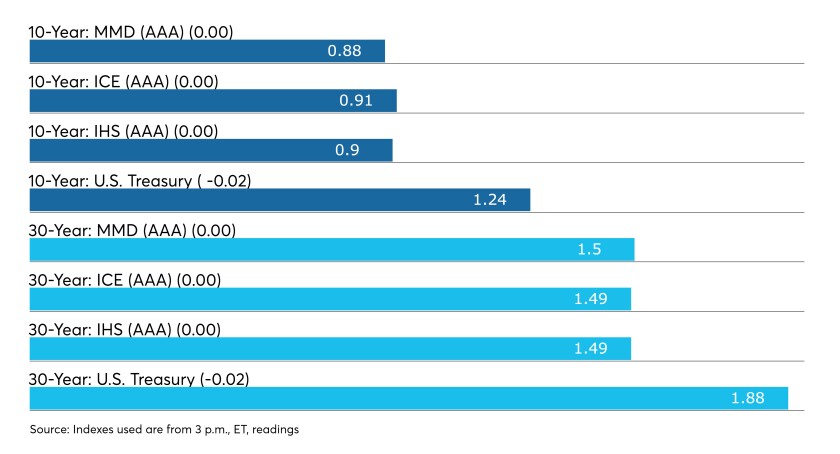 Municipals remained steady on an otherwise lackluster Thursday as the New York Liberty Development Corp. came to market with $1.22 billion of green bonds.

Thursday saw the pricing of the last of the week’s large deals and a typical slow summer Friday lies ahead.

A New York underwriter said the secondary continued to trade sideways with over $1.5 billion new deals pricing Thursday as investors continued their quest for yield in the muni market.

Benchmark triple-A general obligation bonds between 2022 and 2051 were unchanged for the fifth straight trading session, according to Refinitiv Municipal Market Data.

“The market is deadly quiet and unchanged,” a second New York underwriter said Thursday, calling the Liberty deal the focus of the day.

“It did well and had strong support,” he added, noting that demand was so strong underwriters repriced and lowered some of the early serial bonds.

“A lot of people are starved for yield right now so they jumped all over this,” the first New York underwriter said. “The timing is perfect — even though we are seeing summer doldrums, new issues are doing well and the market is in good shape.”

With 3% yields in 30-years, the longest term bonds offered investors 150 basis points over generic triple-A GO bonds at the time of the pricing, according to Refinitiv/MMD.

“I’d be shocked if this didn’t do well,” the second underwriter continued. “There is such a need for high-yield paper — especially in New York right now.”

The authority also sold $106.62 million of federally taxable Front Porch Communities and Services Series 2021B revenue bonds Thursday with coupons ranging from 0.518% in 2022 to 2.64% in 2036, which offered spreads to Treasuries ranging from 30 to 140 basis points, respectively.

The Chicago Park District ( /AA-/AA-/AA) sold taxable general obligation limited tax refunding bonds in Series 2021A. Morgan Stanley structured the deal with coupons ranging from 1.827% in 2029 at 55 basis points higher in yield than comparable Treasuries to 3.075% in 2041, which was a taxable spread of 125 basis points.

The Louisiana Energy & Power Authority sold $119.47 million of taxable Series 2021 A power project revenue refunding bonds (LEPA Unit No. 1). Raymond James & Associates priced the taxable deal with Assured Guaranty Municipal Corp.-insured bonds at par with coupons ranging from 0.474% in 2022 to 3.245% in 2044. The bonds offered spreads of between 25% to 132.5% to the comparable Treasury curve, respectively.

On Thursday, New York City said that during a two-day retail order period on Monday and Tuesday for its $1 billion of tax-exempt general obligation bond deal, it received about $310 million of orders of which about $180 million was usable.

The city also competitively sold $250 million of taxable fixed-rate bonds which attracted 10 bidders, with JPMorgan winning with a true interest cost of 1.481%. Proceeds from the sale will be used to fund capital projects and convert certain floating-rate debt to fixed-rate.

Economy
Economic data was mixed, while Federal Reserve Bank of St. Louis President James Bullard repeated his desire for the Fed to begin the taper process.

With the economy “booming” and expected to continue, and inflation running above 2.5%, and in his estimation continuing above that level next year, Bullard said the Federal Open Market Committee needs to take that possibility into account and be prepared to act should it occur.

His concern is inflation will continue to surpass expectations “and the FOMC will have to go into inflation fighting mode,” Bullard said in a MarketWatch interview. “If we were forced to raise rates rather quickly it would be disruptive to the markets.”

By starting to taper asset purchases with an eye toward finishing by the end of the first quarter of 2022, he said, it gives the Fed “optionality” should things not go as expected.

One reason Bullard expects inflation to continue above 2.5% is “firms have pricing power” unlike in the recent past and are confident they can pass on higher costs. “This suggests persistent inflation.”

And that’s why the Fed “should get going on taper,” Bullard said.

The president isn’t concerned about the Delta variant, or other strains of COVID-19 that may pop up, since the economy has clearly adapted to the pandemic.” Consumers have learned new ways to shop and businesses have also shifted their views.

Therefore, “there’s a clear risk of going slower” in removing accommodation. “We could really get in trouble if we commit to that kind of sequence.” He sees liftoff occurring, if things go as he predicts, in the last quarter of 2022.

As for Thursday indicators, initial jobless claims and the leading economic index surpassed projections, while the Philly Fed manufacturing index came in below expectations, suggesting the recovery continues.

“Initial claims have declined for four consecutive weeks, suggesting steady improvement in the U.S. labor market,” noted Scott Anderson, chief economist at Bank of the West. But, the headline number Is “still almost 100,000 above the mid-March 2020 level.”

Separately, the Leading Economic Index rose 0.9% in July to 116.0, after a 0.5% gain in June, while the coincident index jumped 0.6% after a 0.4% increase and the lagging index climbed 0.6% following a flat read a month earlier.

“The improvement in the leading index points to solid economic growth in the second half of the year,” Anderson said. “All components made positive contributions.”

“The steady contribution of the Leading Credit Index over the past few months underscores the health of household and financial sector balance sheets, despite the economic tumult of the past 18 months,” said Tim Quinlan, senior economist at Wells Fargo Securities and Economic Analyst Hop Mathews. “Next month, we will be watching to see to what extent the rise of the Delta variant has weighed on the outlook.”

The Federal Reserve Bank of Philadelphia’s manufacturing Business Outlook survey showed the economy continued to expand in August, but at a slower pace than in July. The general business conditions index slipped to 19.4 from 21.9.

The price indexes both continued rising, as did the employment index.

In a special question, firms responding said they expect to increase their prices 5.0% in the next year.

The average seven-day simple yield for the 154 tax-free and municipal money-market funds remained at 0.01% from the previous week.

In late trading, Treasuries were stronger as equities were mixed.