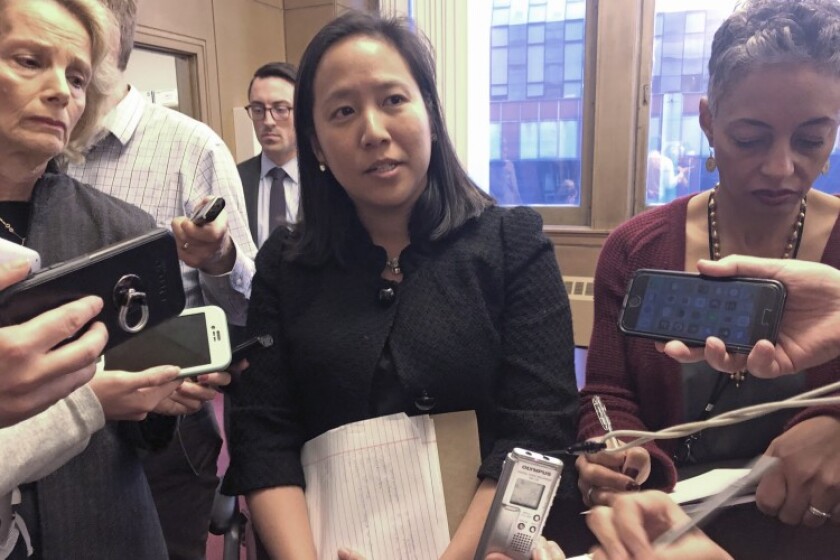 Chicago’s finance team dug in this week on it plan to scrap $950 million of scoop-and-toss borrowing amid pushback from council members who want the city to put more federal COVID-19 pandemic relief toward social investments.

Several council members pressed Mayor Lori Lightfoot’s finance team to consider some limited form of debt restructuring to free up more dollars for human services-related recovery efforts, an early sign the mayor could face a fight on the 2022 budget she will unveil mid-month.

“It’s very important as it relates to our ratings, as it relates to our financial stability overall” that we “not rely on large one-time measures like scoop-and-toss, which obligates us in future years to more debt,” said Jennie Huang Bennett, the city’s chief financial officer, pushing back during a Budget and Government Operations Committee hearing this week on second quarter financial performance.

Chicago last year laid out plans to return to the practice used by Lightfoot’s predecessors of pushing off debt service to manage deficits, a maneuver frowned upon by the municipal market. The city intended to restructure $450 million of debt service owed in 2020 and $500 million in 2021 to help manage $886 million and $783 million pandemic-related tax beatings in 2020 and 2021, respectively.

The council approved the measures last fall despite concerns over the long-term fiscal impact and preferences among some members to dip into the city’s healthy reserves. At the time, Bennett defended the plans as the least damaging to the city’s ratings if it wanted to avoid deep service cuts, layoffs, or tax hikes in the absence of federal help.

The tide shifted when President Biden signed the American Rescue Plan Act in March that is sending to city coffers $1.9 billion that can be tapped to cover lost revenues. The Lightfoot administration put canceling the scrapping the scoop-and-toss plans at the front of the line but council members are pushing back as they look for ways to direct more recovery funds to social and human services.

The city will use $782M of its ARP funds to cover a $1 billion hole in the current budget due to the cancellation of the 2020 and 2021 scoop-and-toss and about $270 million in unbudgeted expenses for a tentative police contract. Higher-than-expected revenues and about $230 million from a debt refunding later this year will fully plug the hole.

The city set up a new credit with JPMorgan last December to borrow the $450 million needed for 2020 debt service in hopes that the federal government would come through with new relief. Without the funds, the city intended to roll that borrowing and the $500 million for 2021 into a larger refunding and restructuring.

Alderperson Anthony Beale called it “robbing Peter to pay Paul” as he asked Bennett when the city decided to scrap the scoop-and-toss.

“Our intent always was, to the extent that we received federal funding, to not go to what would be one of the largest scoop-and-tosses” in city history, Bennett told Beale.

Alderperson Daniel La Spata questioned why the city took out a one-year credit line instead of tapping the Federal Reserve’s Municipal Liquidity Facility for a three-year loan. Bennett countered the line at 1.9% was less expensive than MLF rates based on the city’s ratings. Bennett warned any scoop-and-toss would add to structural woes.

“Our economy has not recovered yet,” La Spata said. “I’m just trying to understand what the options are.”

Alderperson Sophia King pressed the team on whether it considered a multi-year restructuring. “Have you weighed the cost of doing that” alongside the cost of not investing more in social programs that could have a future financial toll on the city?

Bennett and Park stressed the administration would propose a healthy investment that strikes “a balance” between fiscal responsibility and directing greater investments toward mental health, anti-violence and affordable housing initiatives in the 2022 budget.

Those investments will compete for remaining ARP funds with the $733 million projected gap in 2022. The finance team said they could not yet say how much ARP monies would go toward tackling the gap.

The city’s second quarter update provided few surprises for council members as revenues and expenses are closely tracking with budgeted levels, but COVID-19’s resurgence due to the Delta variant poses risks.

Lease-related, income, sales, and some other sources are performing better than expected while others, like ground transportation and parking, are struggling. Overall, revenues are tracking about 6.5% better than budget and most city departments are tracking at 40%-50% of budget expenses.

Corporate fund revenues totaled $1.45 billion through June compared to $1.26 billion a year ago. The city operates on a roughly $4 billion corporate fund. The pandemic’s course, vaccine implementation and speed of economic recovery “continue to be critical factors that shape our city’s revenues each month,” Park told council members.