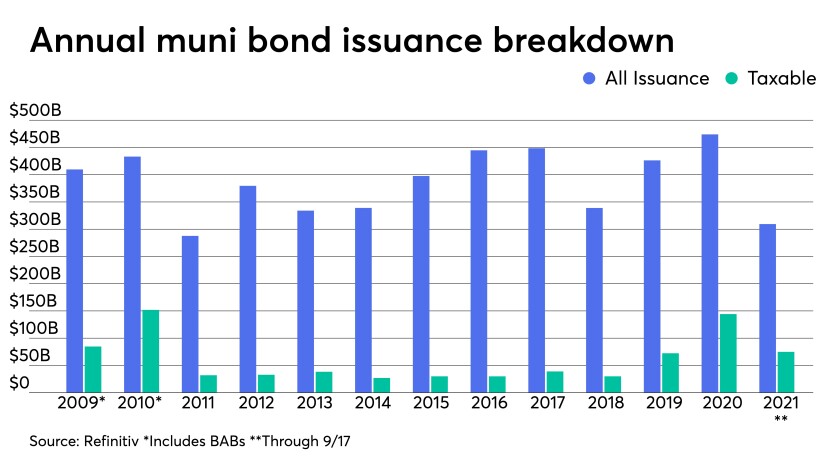 Tax law changes and bond provisions included in the $3.5 trillion reconciliation package being debated in Washington likely will shift the demand components for and the makeup of the muni market in dramatic ways in the coming decade.

The market is closely watching Washington to see whether the proposed tax law changes — higher rates for both individuals and corporations — and new municipal bond tools — the return of tax-exempt advance refundings, a higher bank-qualified limit and direct-pay taxable bonds — come to fruition.

“If enacted as drafted, the impact on the municipal bond market will be comparable to the 1986 tax reform: munis’ supply and demand will both be expanded extensively, and credit quality will strengthen,” BofA Securities strategists Yingchen Li and Ian Rogow said in a Friday report. “A golden decade is to be expected. The tax-exempt muni market will over time transform to a market with much shorter average maturity and mostly advance refunded bonds, while taxable munis will grow fast and big and become the majority of outstanding munis after five years.”

Investor demand for municipals will not only remain strong, but also would strengthen further still, if the proposed higher tax rates and municipal provisions were enacted, said Tom Kozlik, head of municipal strategy and credit for Hilltop Securities.

“That being said, none of what has been proposed is coming as a surprise to investors, for the most part. While the details are new, the overarching theme of higher tax rates do not come as a surprise to market observers or participants.”

Surprise or not, this is the first time the market has tangible evidence of some of these changes actually being enacted since the last time munis were a part of a large legislative effort in the American Recovery and Rescue Act in 2009.

And with demand for municipals already extremely strong for quite some time — fund flows still on track for a record this year — “if the tax changes are implemented in the current form, we will likely see demand for the product remaining quite strong,” Barclays strategists said in a report this week.

Morgan Stanley & Co. strategists said this in June as did BofA Securities, which updated its assessment on Friday that with the new direct-pay bonds, termed Qualified Infrastructure Bonds, 50% of the market will be taxable and it could grow into the trillions.

“Overall, the BABs 2.0 should transform the muni market for the next decade, with a large percentage of new bond issuance being taxable,” BofA strategists said. “It is quite possible that for some time, more than half of the newly issued bonds will be taxable.”

With the proposed subsidy rates for the QIBs, total issuance of such bonds should range from $1.51 trillion-$2.52 trillion if $550 billion new infrastructure spending is put under the program, they said, as issuers are still on the hook for interest payments, even with a subsidy.

Part of this plays out with the return of tax-exempt advance refundings, also in the deal, which will move the exempt market to the shorter end of the curve while taxables will take hold out long. Here is how they see it:

On the other hand, the taxable muni market will grow fast.

Higher tax rates, particularly corporate tax rates, change demand
The increase to the top corporate tax bracket to 26.5%, as now proposed, may boost demand for municipals from property and casualty insurance companies and banks and other corporate investors, a demand component that dropped dramatically after the 2017 Tax Cuts and Jobs Act cut corporate rates to 21%.

“On the institutional side, the main effect for muni demand should be an increase in the top corporate tax bracket to 26.5%,” Barclays strategists said. “Consequently, we might see stronger demand for tax-exempts from banks and P&C insurers, which are especially sensitive to tax-rate changes. High quality long-dated tax-exempts could become much more attractive to these investor groups, compared with similar-rated corporates.”

It is simple math at current rates that certain investors have no need to buy tax-exempt municipals because the yield penalty is so high.

“If corporate tax rates rise, it would reduce the penalty for P&Cs and banks to buy tax-exempts, but at current levels, tax-exempt yields are not appealing to those investors — even at a higher 26.5% rate,” said Patrick Luby, senior municipal strategist at CreditSights.

“They’re already buying taxable munis, anecdotally. The Fed data doesn’t break down taxables vs. exempts, so we don’t know if the reported increase in bank and insurance company holdings has been taxable or tax-exempt,” Luby said. “Right now, banks, P&Cs are buying investment grade corporates like crazy. They want IG muni credit to diversify their portfolios, but at current prices, they don’t make sense. But if there is an increase in taxable muni supply, demand will be there.”

Others echoed this sentiment.

“Fixed income investments like corporate and municipal bonds make up a significant portion of P&C insurer portfolios,” Kozlik said. “The dollar amount of P&C insurer holdings of municipals fell after 2017, but have steadily increased in dollar amount in recent years, even though they have fallen as a percentage of overall portfolios. It is feasible to think that they will continue to add municipals at an even greater pace if such a plan is enacted.”

Additionally, strategists Mikhail Foux, Clare Pickering and Mayur Patel say the market should also monitor whether there is a minimum corporate tax, “which might increase demand for munis from non-financial corporations, including ‘Big Tech’.”

Banks could have more of an incentive to buy municipals if the top corporate tax rate is lifted. Banks have been adding municipals in recent quarters and this momentum could rise further still if such legislation was enacted, Kozlik said.

Both these factors may further expand foreign muni purchases
Taxable municipal bonds make up nearly 24% of issuance this year. That figure is higher if corporate CUSIPs are included. If BABs are eliminated from the taxable total in 2009-2010 and market share in those years, the 2020 figures are the highest on record at $184 billion.

Even with an overall increase in taxable and tax-exempt volume in the past year and half, investors are clamoring for more municipal bonds because new-money paper is scarce and cannot meet demand from redemptions.

So direct-pay bonds would be another taxable tool for issuers to expand their investor base further via international investors and insurance companies, among others.

“It’s a great signal that the taxable marketplace is being invested in by the federal government,” a New York strategist said. “One thing the global buyer faces is a lack of supply in municipals. They have a lot of money and they do not have a limit on what they can invest. But they do have index eligibility to meet and they do prefer larger tranches of debt. Direct-pay bonds give them that. If it makes it through, it could be transformative for this market.”

Banks and life insurance companies throughout Asia, the U.K., and Germany have been new adopters of the asset class in recent years, pushed further along by the taxable boom since 2019.

The combination of the growth in supply of negative yielding assets globally and the steady growth in taxable muni supply provides a window of opportunity for investors to enhance strategies at corporate equivalent yields.

“That is why taxables make sense for both banks and foreign investors — it makes sense that those investors would want to diversify their credit risk with investment grade munis,” Luby said.

In its place, the market gained $180 billion of taxables in 2020 alone, opening up the market to a broader investor base and more options for issuers, such as corporate CUSIPs and forward delivery bonds.

Tax-exempt advance refundings are proposed to be resurrected, this will bring additional $80 billion to $100 billion to the tax-exempt market, Barclays estimates.

BQ limits
Adding to bank investment would be the much-coveted small-issuer or bank-qualified limit rising from the decades-old $10 million to $30 million.

“For the most part this was a successful temporary tactic that was allowed for BQ issuance under the 2009 Recovery Act in 2009 and 2010 and allowed banks to purchase larger amounts of municipals,” he said. “A more attractive relative value argument combined with the ability to buy larger amounts of issues could offer an incentive for banks to allocate more investment assets to the municipal bond market.”

A moving target
It all depends on what eventually comes out of Washington. The price tag for the municipal provisions is not that high in relation to the overall package, leading advocates in Washington to be bullish on their making it into a final package. Restoring advance refundings is estimated to cost $14 billion over 10 years and the direct-pay program is estimated at $22 billion. The bank-qualified provision carries a $5 billion price tag over the next decade.

“With the inclusion of much-sought-after muni provisions, we expect the muni lobby to be gearing up to protect the current language,” BofA said. “The lobby has been successful in the past, but as we saw in 2017, also unsuccessful.

“With such thin margins for Democrats in the House and Senate, no provision seems safe in our view,” they said.

$1,928.77 Profit from a NVDA Earnings Option Trade (Butterfly)
Munis steady, FOMC meeting leads to paltry new-issue calendar
What is a ‘rolling recession’ and how does it affect consumers? Economic experts explain
These common misconceptions can prevent you from achieving that perfect credit score
Stocks making the biggest moves midday: Norwegian Cruise Line, Allstate, Roblox and more