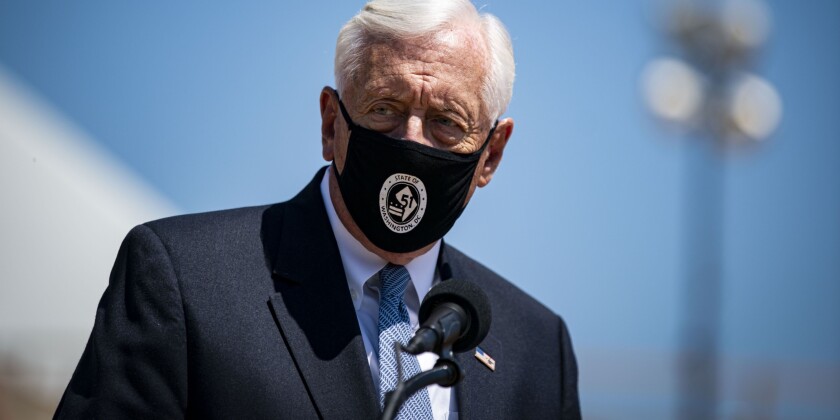 The House will vote next week on raising the nation’s $28 trillion debt ceiling, but a political standoff between Democrats and Republicans still threatens to send the U.S. into a payments default next month.

The Treasury Department has warned that without congressional action, the government could default sometime during October. But Senate Minority Leader Mitch McConnell this week rejected an appeal by Treasury Secretary Janet Yellen for Republicans to join with Democrats in raising the debt limit.

House Majority Leader Steny Hoyer said in a scheduling notice Friday that the House will vote next week on the debt ceiling as well as a must-pass stopgap spending measure to keep the government operating past the Sept. 30 end of the fiscal year.

No decision has been made yet on whether to include the debt ceiling provision in the government funding bill, a Democratic aide said. Tying the two together would link the risk of a government shutdown with the potential of a default, raising the stakes of a “no” vote.

The spending resolution also would include new money for natural disaster recovery and to process Afghan refugees, Hoyer said. Democrats are eyeing a stopgap that runs through Dec. 3, according to a person familiar with the bill.

The top Republican on the House Ways and Means Committee, Kevin Brady of Texas, said he told Yellen on Thursday to present a structured plan for government spending to help grease bipartisan talks on raising the federal debt limit.

“Will she do it? Or will Democrats? You know, I don’t know,” Brady said on Bloomberg TV’s “Balance of Power” with David Westin. “But it certainly would be a huge step forward.”

Past debt-ceiling increases have been tied to budget-cap agreements.

Democrats could bypass a Senate Republican filibuster of a debt ceiling increase by using a special fast track budget procedure but have so far decided not to do so, insisting the burden of raising the ceiling must be on both parties. That could change closer to the deadline, however.

The Biden administration is ramping up pressure on Republicans to relent on the debt ceiling. In addition to calls by Yellen to McConnell and other senior Republicans, the White House said in a letter to state and local governments that breaching the debt ceiling “could cause a recession. Economic growth would falter, unemployment would rise, and the labor market could lose millions of jobs.”

The House will also vote on the annual defense policy bill next week and abortion-related legislation, Hoyer said.

Hoyer said he plans to bring the $550 billion bipartisan infrastructure bill to the floor for a vote on Sept. 27, making good on a commitment from House leaders to moderate Democrats. The House also plans to vote on its version President Joe Biden’s tax and spending proposal during the current work period, which ends Oct. 1.

House Speaker Nancy Pelosi may face a rebellion from progressives in her caucus during the vote on the infrastructure bill.

Progressives have demanded that the larger tax and spending bill total $3.5 trillion and that it be enacted before the infrastructure vote. That now appears unlikely.

Despite policy committees finishing work on the larger bill, significant differences remain in the caucus and with the Senate over the content and scope of that larger bill.