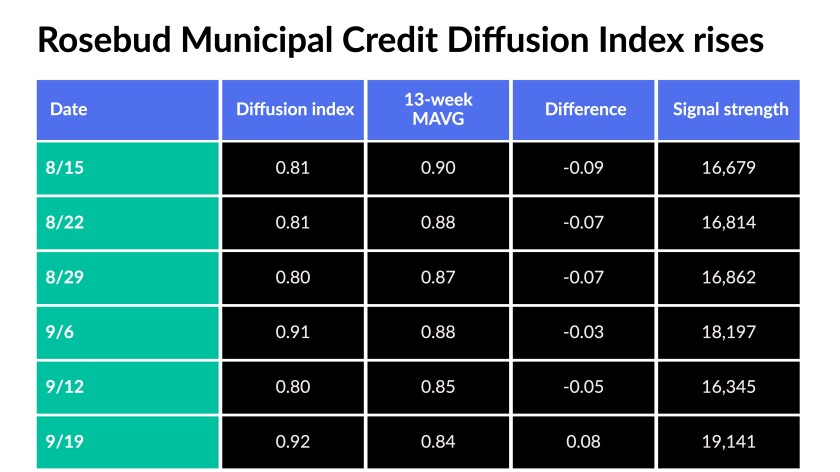 Municipals largely ignored the rally in U.S. Treasuries and a massive selloff in equities as participants await another large new-issue week.

Without the primary in play and a mostly muted secondary, triple-A benchmark yield curves were little changed, coming nowhere near the moves in Treasuries as the 10- and 30-year UST fell five and six basis points from Friday, respectively, as negative headlines out of China, taper concerns and continued COVID uncertainty weighed heavily on stocks, which saw the largest losses in almost a year.

“Markets are clearly being driven by China at the moment with a risk-off tone prevailing,” said Shaun Burgess portfolio manager and fixed income analyst at Cumberland Advisors.

“Whether this bleeds into the municipal market remains to be seen,” he said. “There is a lot of overhang and potential for volatility, so we remain somewhat defensive here as we look for attractive relative value in the new-issue space.”

The preliminary pricing of upcoming deals looks to be in line with the pricing of deals last week, Burgess said, which “speaks to a healthy buy-side supporting the overall market.”

Many of the deals Cumberland participated in last week were multiple times oversubscribed, he said.

The market kicks off with several large new-issues on Tuesday from Massachusetts with nearly $1 billion of competitive loans, Ohio State University green bonds and the Triborough Bridge and Tunnel Authority with more than $800 million, among others. The 30-day visible supply figure sits at $13.26 billion.

A less-than-sunny tone was seen in Rosebud Strategies LLC’s municipal diffusion index, which rose in the latest week.

“The index has risen above both its 13-week moving average and its 12-month trend,” said Christopher Mier, founder of Rosebud Strategies LLC. “This could possibly signal a breakout of the current range toward increased market discounting of credit risk. In other words, credit spreads could be widening.”

Nuveen said it expects muni demand to persist, as investors seek income in an environment where interest rates in general will probably remain lower for longer.

“However, we may see a selloff in tax-exempt yields as we approach year end, as the new-issue calendar will likely continue to be outsized. Deals will likely be priced to clear the market,” according to Nuveen. “However, flows continue into the asset class, and a tremendous amount of short-duration bonds are looking to be redeployed at higher yields further out on the yield curve.”

On an annualized basis, municipal CUSIP identifier request volumes were up 2.4% through August. For muni bonds specifically, there was an increase in request volumes of 5.3% month-over-month, and they are up 7.7% on a year-over-year basis.

“We’re seeing a second month in a row of declining CUSIP request volume, but it is also important to recognize that August is a historically slower month for issuers,” said Gerard Faulkner, CUSIP Global Services’ director of operations. “We will continue to monitor request volumes closely to get a clearer read on expected issuance activity as we head into the fourth quarter.”

Slow path to taper
Most observers expect the Federal Reserve to continue taking baby steps toward taper, which could be announced in November, after perhaps some hints provided in this week’s post-meeting statement.

“We anticipate that the Fed will offer explicit tapering hints on Wednesday, followed by a formal announcement in November, and that the 2023 dots get revised down to one,” said John Hancock Investment Management’s Co-Chief Investment Strategist Emily Roland.

Morgan Stanley researchers expect the statement to offer confirmation that “if the economy evolves broadly as anticipated, it could be appropriate to start reducing the pace of asset purchases this year.” But they expect the announcement will come in December.

With questions about the employment situation, following a disappointing nonfarm payrolls number, the continuing Delta variant stresses, and the softer inflation reads, Christian Scherrmann, U.S. Economist at DWS Group, said, “We think that officials might want to wait and see if the promised surge in hiring on the back of expiring extended unemployment benefits in September actually is happening — which we will only know by the November FOMC meeting.”

As a result, DWS expects a taper announcement in November, with reductions in asset purchases beginning in December.

Noting the last Summary of Economic Projections was more hawkish than expected, John Hancock’s Roland, said, “Since then, growth has hit an air pocket.”

While the effects of the Delta variant shoulders part of the blame, and will be transitory, she said, “we believe that the end of direct transfer payments (stimulus checks) is tempering growth in a more persistent way. [Fed Chair Jerome] Powell is not going to want to risk tapering too soon/raising rates into a slowing growth environment and may be a bit more dovish than markets expect.”

But should the Fed message remain hawkish, Roland said, “the ‘September slump’ in equity markets could continue.”

With only one employment report to be released before the November meeting, Morgan Stanley Chief U.S. Economist Ellen Zentner said, “Unless we get an absolute blockbuster report, that likely sets the committee on the course to December,” with the reductions beginning in January.

As for the new dot plot, Morgan Stanley expects it to show rates holding in 2022, three 25 basis point hikes in 2023 and three more in 2024. “Powell will have ample opportunity to de-emphasize the importance of the dots as a policy signal,” they said.

“We expect the Fed to gently guide markets further toward more significant changes in the near future,” DWS’ Scherrmann said. “This could be expressed by an adjustment of the statement, most likely mirroring the Chair’s speech at Jackson Hole where Powell stated that ‘… if the economy evolved broadly as anticipated, it could be appropriate to start reducing the pace of asset purchases this year.’”

As for the SEP, he suggested Fed participants may lower their growth forecasts. “But the reality remains, despite some likely downward revisions to growth, that the U.S. economy is growing far above potential — one necessary condition for adjusting monetary policy.”

Inflation forecasts are likely to be revised higher.

“While the significance of the dot plot is routinely downplayed by the Fed chair,” Scherrmann said, “we think that market participants have already accepted that tapering is going to begin and are now zooming in on the expected rate path looking ahead.”

Currently, DWS expects two or three 25 basis point increases in 2023 and three more in 2024. “For 2022 we do not expect the dot plot to signal a rate hike,” he said, “but we imagine that a minority of individual dots might move up a bit. While this does not necessarily imply an earlier than expected lift-off, it could set a more hawkish tone for the overall meeting.”

Grant Thornton Chief Economist Diane Swonk said the Fed “will have to acknowledge a hard reality: Economic growth is coming in weaker than forecast, while inflation is coming in hotter.” And, while Powell has said if inflation doesn’t ease, “the Fed will do the heavy lifting necessary to bring down inflation,” that scenario “is becoming more likely.”

In data released Monday, homebuilder confidence ticked up rather than take an expected dip. The National Association of Home Builders Wells Fargo Housing Market Index climbed to 76 in September from 75 in August.

“The single-family building market has moved off the unsustainably hot pace of construction of last fall and has reached a still hot but more stable level of activity, as reflected in the September HMI,” according to NAHB Chief Economist Robert Dietz. “While building material challenges persist, the rate of cost growth has eased for some products, but the job openings rate in construction is trending higher.”

Massachusetts is set to sell $350 million of general obligation bonds consolidated loan of 2021 Series D at 10:30 a.m. on Tuesday.

Massachusetts is set to sell $385 million of general obligation bonds consolidated loan of 2021 Series C at 10 a.m. on Tuesday.

Christine Albano contributed to this report.

Bitcoin, Ethereum Technical Analysis: ETH, BTC Marginally Higher Ahead of FOMC Meeting Results
HMRC admits errors in responses to FoI requests over ministerial probes
Board threatens 0.21% payment for PREPA bondholders who don’t settle
Salt Lake City, Dallas And Denver Are Expected To Have The Biggest Inventory Gains In 2023
January job growth is forecast to slow slightly, but the impact from big corporate layoffs is uncertain