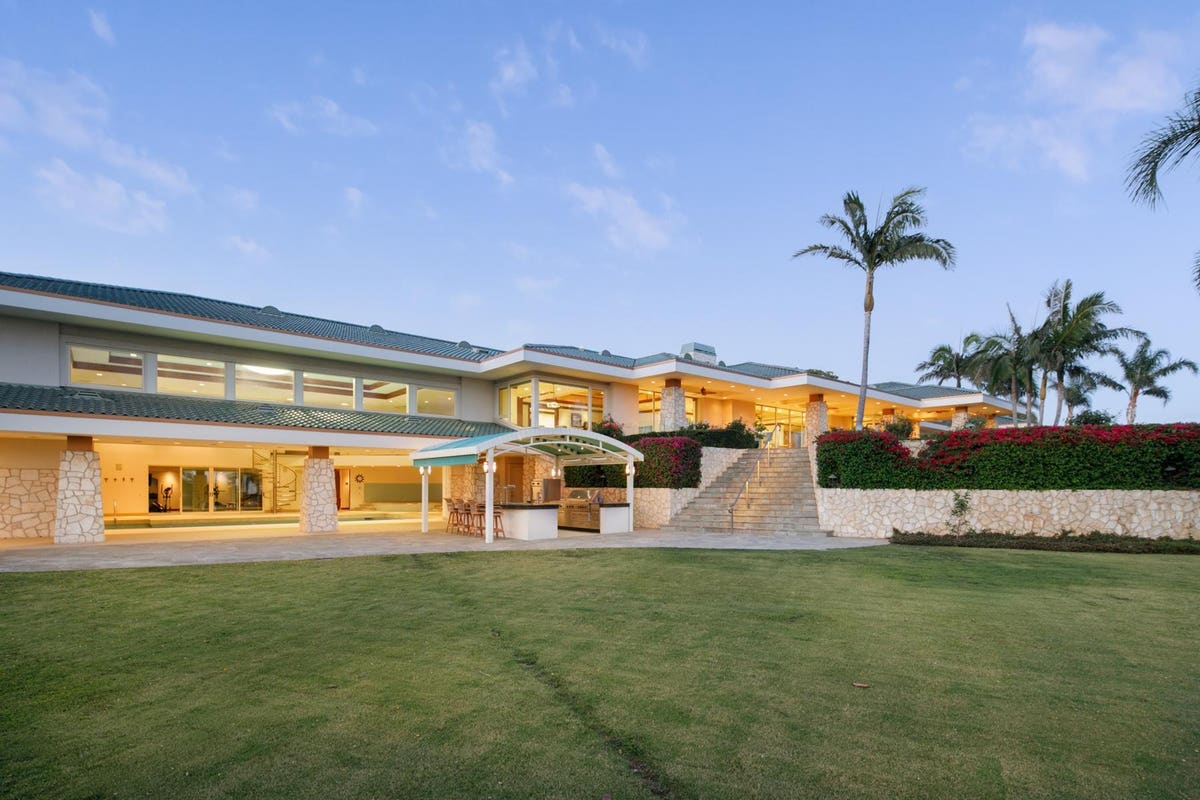 With ocean views and a blanket of greenery surrounding it, one might think this custom compound is set on the North Shore of Kauai. In actuality, the $29.95-million estate is across the Pacific—nestled among 140 acres of organic avocado groves in Somis, California, a quiet community located halfway between Beverly Hills and Santa Barbara.

Built in 2009, the property centers on a Hawaii-inspired main house of 17,000-plus square feet with six bedrooms and nine bathrooms. A two-bedroom guesthouse and a 3,400-square-foot climate-controlled garage/agriculture building are among more than a half-dozen other structures found on the site.

That the compound’s design draws inspiration from the beachfront estates of Hawaii is no mistake. When designing the home, the owner flew his architect to Hawaii to study the local architecture. Stone siding and a turquoise Monier tile roof give the exterior a tropical feel, and the open-concept interior is defined by beautiful Brazilian rosewood and ceramic tile floors. Retractable glass walls are used to create a seamless connection between indoor and outdoor space.

Kerr-Jarrett notes that the owner, an engineer by trade, designed the compound for comfort and put a great deal of thought into how he and his family would use and live on the property. Large communal spaces, chef’s and prep kitchens and an executive office are complemented by a western wing that holds an indoor swimming pool, gym, sauna, smoking lounge and wine cellar. Guest bedrooms are entirely separate from the primary wing.

Outdoor amenities were also meticulously planned out. Multiple lanais extend the living space outwards and, on a clear day, take in views stretching as far as the Channel Islands. Off the pool area is a barbecuer’s delight: an outdoor pavilion complete with multiple grills, smokers, a wine fridge and a kegerator.

Consider the avocado production—the groves, which are irrigated entirely by a private well, produce upwards of 1.5 million pounds of fruit annually—and it all adds up to being a rare combination of resort living and profitable enterprise, Kerr-Jarrett says.

“For someone who wants an escape away from Los Angeles, but doesn’t want to travel that far, this is an ideal property. The beauty of it is you’re 20 minutes from Westlake Village and about an hour from Beverly Hills—it really is an ideal escape.”

Across the countries, properties with ample room and flexible space have been in high demand since the onset of the pandemic. In Southern California, the demand for bigger spaces has sent home prices skyrocketing. According to The Los Angeles Times, Los Angeles and Orange counties now have 55 cities and unincorporated areas where the typical home is valued at $1 million or more.

Kerr-Jarrett likened the urgency in the market to buyers wanting to create their own bubble. “The ability to escape from the city has been a top priority among luxury buyers. Many of my clients want larger spaces and places where they can feel comfortable outside. People don’t want to be separated from their loved ones, and because of that, we’re seeing more requests for properties that can accommodate not only families but generations of families.”

As winter approaches and the country prepares for another COVID surge, expect to see continued activity in the market as homebuyers seek out more square footage and living space

Stocks making the biggest moves midday: American Express, Intel, Silvergate Capital and more
Pending Home Sales Improve In January As More Buyers Return
Bitcoin, Ethereum Technical Analysis: BTC, ETH Consolidate Ahead of US Consumer Sentiment Data
What is the Bitcoin Loophole, and how does it work?
Beyoncé, a $100k-a-night suite and a red carpet of influencers: Dubai basks in its booming economy