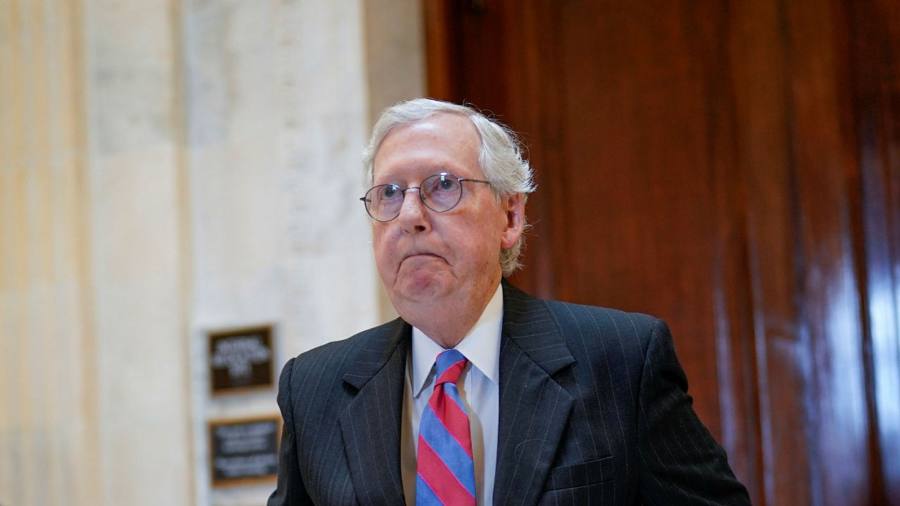 Two top Fed officials on Monday warned that failing to raise the US debt ceiling would have catastrophic consequences, hours before Republicans in the Senate were set to block a bill that would increase the borrowing limit and stave off a government shutdown.

John Williams, the president of the Federal Reserve Bank of New York, said the US central bank would be unable to mitigate the impact of a potential default on the government’s debt. The Bipartisan Policy Center, a Washington think-tank, estimated last week that the US government could default on its obligations as soon as mid-October if the debt ceiling is not raised.

Williams warned reporters of the risk that investors could become “extremely nervous” and think “I’ve got to get out of things”, which he said could lead to an “extreme kind of reaction in markets”. He said current prices for US Treasuries reflected a belief among investors that “cooler heads” would prevail in Congress, and were therefore not necessarily an “indicator of how big the risks are”.

“If you actually crossed that line and got to a place where the government wasn’t paying off its obligations, I think it would create a very negative dynamic not only in the US but around the world,” Williams said, invoking the meltdown in the market for US Treasuries last year.

“We saw it in March of 2020, the Treasury market . . . is the center of the global financial system and if it’s not able to work that has repercussions,” he said.

Trading conditions in the $22tn market for US government debt seized up at the onset of the pandemic last year, as investors ditched even the safest securities in a broad-based dash-for-cash. Treasuries are considered the world’s risk-free asset, serving as a benchmark for global financial markets. The abrupt bout of illiquidity forced immediate interventions from the Fed to stave off a more severe crisis.

The Democrat-controlled House of Representatives passed a measure earlier this month in a party-line vote to avert a government shutdown on October 1 and extend the US debt limit until December next year.

But all 50 Republicans in the Senate, which Democrats control by the slimmest of margins, are poised to reject the bill when Chuck Schumer, the Democratic Senate majority leader, brings it to the floor on Monday evening. Given the bill needs 60 votes to pass the upper chamber, it is almost certain to fail.

Federal Reserve governor Lael Brainard on Monday also urged lawmakers to act, saying at an event hosted by the National Association for Business Economics: “Congress knows what it needs to do. It’s done it before. It needs to step up; it has responsibilities.”

“The American people have had enough drama over the last two years,” she added.

The comments from Brainard and Williams follow warnings from Fed chair Jay Powell last week of “severe damage” to the economy and financial markets should the US default on its obligations.

“It’s just not something that we should contemplate,” Powell said. “No one should assume that the Fed or anyone else can fully protect the markets or the economy in the event of a failure.”

Monday’s vote in the Senate will bring to a head a weeks-long stand-off between Democrats — who have called on the GOP to sign on to lifting the Treasury’s borrowing limit — and Republicans, who have steadfastly refused to endorse the measure and repeatedly accused Joe Biden’s party of reckless public spending.

Nancy Pelosi, the Democratic speaker of the House, has scheduled a make-or-break vote on the infrastructure bill for Thursday, the same day that funding for the federal government is set to run out.

Pelosi said at the weekend that she would not bring the infrastructure bill to the House floor until she was sure she had the votes to pass it. That prospect still looked uncertain on Monday, as several progressive and moderate lawmakers raised issues with the legislative package.

Progressives want assurances that the $3.5tn bill will not be watered down in the Senate, while moderates say the sweeping social investments need to be scaled back.

But Biden struck an upbeat tone at the White House on Monday, telling reporters he was a “born optimist”.

When asked what was “at stake” for his presidency amid the congressional wrangling this week, the president replied: “Victory is at stake.”

Republicans voted to suspend the debt limit three times during Donald Trump’s administration, in efforts that were backed by Democrats.

This time, however, the opposition party, led by Senate minority leader, Mitch McConnell, has insisted that Democrats should bypass the Senate filibuster — which requires the support of at least 10 Republicans in order for a measure to become law — and go it alone to extend the borrowing limit and avert a government shutdown ahead of a 12:01am Friday deadline.

Janet Yellen, the US Treasury secretary, has said failing to lift the limit on federal borrowing would be a “catastrophe”.

But Senate Republicans have so far not blinked, arguing that there is no risk of calamity because Democrats can use Senate procedure to lift the debt limit and fund the federal government on their own. Democrats at present control the upper chamber of Congress, 50-50, with vice-president Kamala Harris able to cast a tiebreaking vote.

Republicans are also trying to tear apart Biden’s legislative agenda with just over a year to go until the 2022 midterm elections, when control of both the House and Senate will be up for grabs.

Munis steady, FOMC meeting leads to paltry new-issue calendar
What is the Bitcoin Loophole, and how does it work?
How to Find Unusual Options Activity in ThinkorSwim (Sizzle Index)
Stocks making the biggest moves after hours: Tesla, Chevron, ServiceNow, Levi Strauss, IBM and more
NFT creator: Amber Vittoria crushes it in her ‘Big Girl Pants’