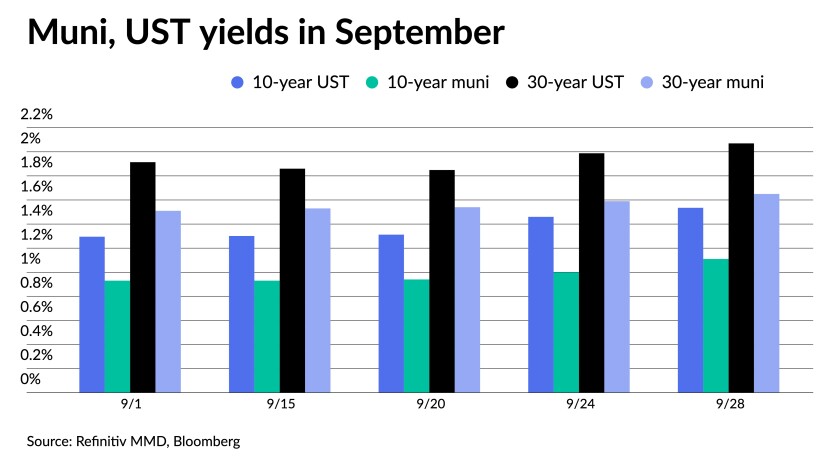 Municipal yields rose as much as seven basis points in spots along the curve Tuesday as municipal investors rode the rapid rise in U.S. Treasuries and a volatile equity market as a time to move the asset class into a higher-yield environment.

Triple-A benchmark yield curves cut levels by two to seven basis points. Selling pressure was felt across the curve, but most in the belly once again, where high-grade names were trading off, but bid-side depth was weak, traders noted.

Municipals have not tracked directly with the UST moves, where the 10- and 30-year UST has risen 24 and 26 basis points, respectively, from Wednesday. Municipals have seen yields rise by 16 and 11 basis points on the 10- and 30-year, respectively, from Wednesday. Participants are waiting on month/quarter end calendar flip to react fully.

U.S. Treasuries on Tuesday hit 1.02% in five years, above 1.535% in 10 and landed well above the 2% mark at 2.08% in 30 in late trading as investors digest the coming taper and uncertainties around the debt ceiling debate in Washington.

“The market has begun a pullback in rates — almost predictably — at quarter end and on the heels of a taxable retreat,” said Kim Olsan, senior vice president at FHN Financial. “While the reaction in muni yields has been less than the basis points the 10- and 30-year UST have given up since the start of the month, a weaker bias still feels like a surprise after such a long, steady period.”

Demand is not the issue, as was the case in the March 2020 selloff, “rather a correction to a more normalized absolute yield range” is occurring, Olsan said.

Absolute rates have moved higher and offer more compensation shorter on the curve, she said.

“High-grade names in the 10-year area are now well above 1% and maturities past 20 years offer both 21% and top-bracket individual buyers more taxable equivalent yield,” Olsan said.

Credit spreads could widen in sectors that have tightened in the search for yield concession, she said.

“Transportation and healthcare names have enjoyed a demand surge, forcing shorter-end spreads not that far off those of comparable GOs or utilities. September’s losses in each sector are slightly greater than the broad market. Issuance in related credits this week could offer more clarity in that regard.”

Supply is ticking upward with Bond Buyer 30-day visible sitting at $12.15 billion with net negative supply at $4.668 billion, per Bloomberg.

“Seasonality indicates the market could face a weaker bias in coming weeks,” Olsan said. “Higher supply and lower redemptions are creating a smaller net negative outlook, which could also turn into a positive net supply at some point. The 10-year AAA spot is about 10 basis points from its annual yield high (mid-March when issuance grew to $47 billion and redemptions trailed off).”

In late trading, Treasuries were weaker as equities sold off led by the Nasdaq.

Consumer confidence falls
Confidence among consumers fell to a seven-month low this month as national and world events weighed heavily on sentiment.

The Conference Board’s consumer confidence index dropped to 109.3 in September from 115.2 in August, the third straight monthly decline.

Economists polled by IFR Markets had expected the index to drop to 114.5 this month.

“Consumer confidence dropped in September as the spread of the Delta variant continued to dampen optimism,” Lynn Franco, Senior Director of Economic Indicators at The Conference Board, said in a release. “Concerns about the state of the economy and short-term growth prospects deepened, while spending intentions for homes, autos, and major appliances all retreated again. Short-term inflation concerns eased somewhat, but remain elevated.“

She said consumer confidence was still high by historical levels and enough to support further growth in the near-term.

“But the index has now fallen 19.6 points from the recent peak of 128.9 reached in June. These back-to-back declines suggest consumers have grown more cautious and are likely to curtail spending going forward,” she said.

“Consumer confidence dropped to a seven-month low in September as the Delta variant brought a spike in COVID cases. With no shortage of other factors to blame, such as wildfires, war, hurricanes and a border crisis, we see room for improvement in coming months. One silver lining: the share of consumers seeing jobs as plentiful rose to the highest level on record,” according to the Economics Group of Wells Fargo Securities

They noted that a strong labor market might be the only thing giving consumers much cheer these days.

“The month began amid the ugly wind-down of the war in Afghanistan, historic wildfires are raging in the West as Hurricane Ida and related flooding swamp communities across the East. (Ida made landfall on Aug. 29, too late to be fully captured in last month’s confidence survey),” Wells Fargo wrote. “The looming limit on the debt ceiling and related Congressional bickering may not be a top of mind concern for the average consumer, but it does not likely lift spirits either.”

On Tuesday, Treasury Secretary Janet Yellen sent another letter to members of the Congressional leadership regarding the debt limit.

“We now estimate that Treasury is likely to exhaust its extraordinary measures if Congress has not acted to raise or suspend the debt limit by Oct. 18. At that point, we expect Treasury would be left with very limited resources that would be depleted quickly. It is uncertain whether we could continue to meet all the nation’s commitments after that date,” she wrote.

“While this is our best estimate, the federal government’s cash flows are subject to unavoidable variability … it is important to remember that estimates regarding how long our remaining extraordinary measures and cash may last can unpredictably shift forward or backward. This uncertainty underscores the critical importance of not waiting to raise or suspend the debt limit. The full faith and credit of the United States should not be put at risk,” she wrote.

She added that waiting until the last minute can cause serious harm to business and consumer confidence, raise borrowing costs for taxpayers, and negatively impact the credit rating of the United States.

“Failure to act promptly could also result in substantial disruptions to financial markets, as heightened uncertainty can exacerbate volatility and erode investor confidence,” she wrote.

Home prices continued to rise in July across the United States.

“There’s a surge of millennials approaching the prime home-buying age and are experiencing more flexibility to expand their search locations,” said CoreLogic Deputy Chief Economist Selma Hepp. “Additionally, there are move-up buyers with larger budgets who are relocating to more affordable areas where they’re financially able to outbid local residents. Taken together, these factors have created a double-whammy for home price growth.”

Homebuyers continued to see historically low mortgage rates, but they have now been joined by an influx of investor buyers who came in over the summer. This continued demand has even outstripped the improvements in the supply of for-sale homes from the all-time lows experienced in the spring.

Scott Anderson, Ph.D., chief economist at Bank of the West Economics, said that while July’s gain marked the slowest pace of growth since February, prices were still on the rise.

“Home prices are still up a robust non-seasonally adjusted 20.0% from a year ago on solid buyer demand, low mortgage rates and lean inventories,” Anderson said. “We are forecasting home price growth will slow over the balance of this year and in 2022 as demand weakens and more inventory for sale hits the market.”

The indexes for revenues and demand declined to negative three and 17, respectively from 15 and 25 in August.

Many service sector firms reported growth in employment and wages in September, but had a hard time finding workers with the necessary skills. The firms expect this to continue, along with wage growth, over the next six months.

The Richmond Fed also reported that manufacturing activity softened slightly in its district in September.

According to its most recent manufacturing survey, the composite index declined to negative three this month from nine in August. The indexes for shipments and new orders fell below zero for the first time since May 2020. However the employment index remained positive.

The Richmond Fed said those firms responding to the survey continued to see low inventories and lengthening lead times along with backlogs of orders. Companies said local business conditions were weaker, but were optimistic conditions would improve in the next six months.

“Survey results suggested that many firms increased employment and wages in September,” the Richmond Fed said. “However, finding workers with the necessary skills remained a challenge. Survey participants expected this difficulty to continue, along with employment and wage growth, in the coming months.”

In Texas, the Dallas Fed said that according to those business executives who responded to its manufacturing outlook survey, factory activity continued to increase in September.

The production index, which measures state manufacturing conditions, rose three points to 24.2 this month, well above average and an indication of solid output growth.

Other measures of manufacturing activity were mixed. While the shipments and capacity utilization indexes rose, the demand indexes fell. The new orders index came in at 9.5, down from 15.6 but still slightly above the series average of 6.5. The growth rate of orders index fell eight points to 2.5.

Perceptions of broader business conditions were also mixed in September. While both the company outlook and general business activity indexes moved down from their August readings, the company outlook index slipped into negative territory at negative 2.8, signaling a slight worsening of outlook. The general business activity index, however, remained positive at 4.6. The outlook uncertainty index edged up to 23.3.

Prices and wages continued to increase strongly in September, the Dallas Fed said. The price indexes climbed, with the finished goods prices index at 44.0, an all-time high. The wages and benefits index was unchanged at an elevated reading of 42.7.

Competitive
The Maryland Department of Transportation (Aa1/AAA/AA+) is set to sell $138.415 million of consolidated transportation bonds, refunding series 2021B at 11 a.m. Wednesday.

The Maryland Department of Transportation (Aa1/AAA/AA+) is set to sell $295 million of consolidated transportation bonds, Series 2021A at 10:30 a.m. Wednesday.