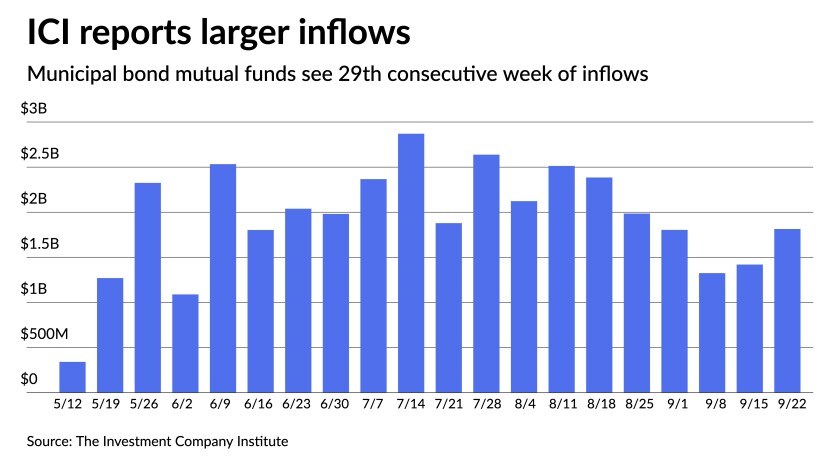 Municipals were slightly weaker outside of five years Wednesday, with triple-A benchmarks cutting levels by a basis point or two, after four days of a correction to higher yields not seen since February and March of this year.

U.S. Treasuries pulled back from Tuesday’s losses earlier in the morning, but yields rose into the afternoon and then fell again near the close to settle at 1.528% in 10-years and 2.075% in 30.

It brings the total inflows to $76 billion year-to-date. Exchange-traded funds saw $233 million of inflows after $510 million a week prior.

“We’ve definitely seen a correction to these higher yields driven by volatility in govies and stocks, and I see it as more opportunistic, month/quarter-end selling by participants tired of grossly low yields,” a New York trader said. “By that I mean other than taper coming and inflation concerns, not much else has changed in the municipal market fundamentally. Look at fund flows — massive again.

“Perhaps some sectors are too rich (i.e. transportation and healthcare) because COVID concerns are still here and the rebound there might not be as swift,” he said. “Everybody wants higher yields, save for the issuers. This was a welcomed correction.”

Supply slows in September
Preliminary supply figures for September show $33.8 billion of total debt as of Wednesday, a 36.7% drop year-over-year. Taxables fell a whopping 68.7% in September as did refundings by 66.8%.

Wednesday’s issuance is not included, which will bring the figures down some but a 30% drop is still significant. But September 2020 had some COVID-distorted issuance (as did most months in 2020) and some pre-election growth (as did October 2020).

Taxable volume is growing with several new issues lining up with billion-plus deals including $1.5 billion from the Alabama Federal Aid Highway Finance Authority and nearly $500 million of taxable green bonds for the San Diego Unified School District, among others.

Total preliminary figures put year to date issuance at $344.016 billion, slightly lower than the $355.01 billion in 2020. Final figures will be released Thursday.

The average seven-day simple yield for the 150 tax-free and municipal money-market funds sat at 0.01%, the same as the previous week.

Taxable money-fund assets fell by $52.77 billion, bringing total net assets to $4.382 trillion. The average, seven-day simple yield for the 765 taxable reporting funds sat at 0.02%, same as the prior week.

In late trading, Treasuries were weaker as equities were mixed.

Pending home sales up; Harker voices cautious optimism
The housing market seems to be on the upswing as one indicator of activity released Wednesday surprised to the upside.

Economists surveyed by IFR Markets had expected a gain of only 1.3% last month after pending sales had fallen a revised 2.0% in July, originally reported as a 1.8% drop.

The pending home sales index, which is based on contract signings, increased to 119.5 in August from 110.5 in July. An index of 100 is equal to the level of contract activity in 2001.

Each of the four major regions saw month-over-month growth in contract activity, NAR said. However, all reported year-over-year declines as signings dipped 8.3%, with the Northeast being hit hardest.

“The more moderately priced regions of the South and Midwest are experiencing stronger signing of contracts to buy, which is not surprising,” Yun said. “This can be attributed to some employees who have the flexibility to work from anywhere, as they choose to reside in more affordable places.”

Looking at the national economy, Patrick Harker, President of the Federal Reserve Bank of Philadelphia, said he sees some signs of cautious optimism ahead.

“For 2021, I would expect GDP growth to come in at around 6.5%. It will then moderate to about 3.5% in 2022, and 2.5% in 2023. Inflation, meanwhile, should come in around 4% for 2021 — we’re already seeing some moderation there, as prices of used cars finally stabilize,” he said in remarks prepared for delivery to a virtual meeting of the Risk Management Association’s Philadelphia Chapter. “After that, we can expect inflation of a bit over 2% for 2022 and right at 2% in 2023. Unemployment should fall steadily during this period as well.”

He noted that downside risks include supply chain disruptions and possibly another resurgence of the coronavirus. In the short term, he said Congress’ failure to raise the debt ceiling could harm economic growth significantly.

“In terms of monetary policy, I am in the camp that believes it will soon be time to begin slowly and methodically — frankly, boringly — tapering our $120 billion in monthly purchases of Treasury bills and mortgage-backed securities,” he said.

He noted that while asset purchases were necessary to keep financial markets functioning during the height of the pandemic, he said the problem lies on the supply side, not with demand.

“You can’t go into a restaurant or drive down a commercial strip without noticing a sea of ‘Help Wanted’ signs. Asset purchases aren’t doing much — or anything — to ameliorate that,” he said.

Harker added that only after the Fed tapers its asset purchases, it can begin to think about raising the federal funds rate.

“But I wouldn’t expect any hikes to interest rates until late next year or early 2023,” he said.