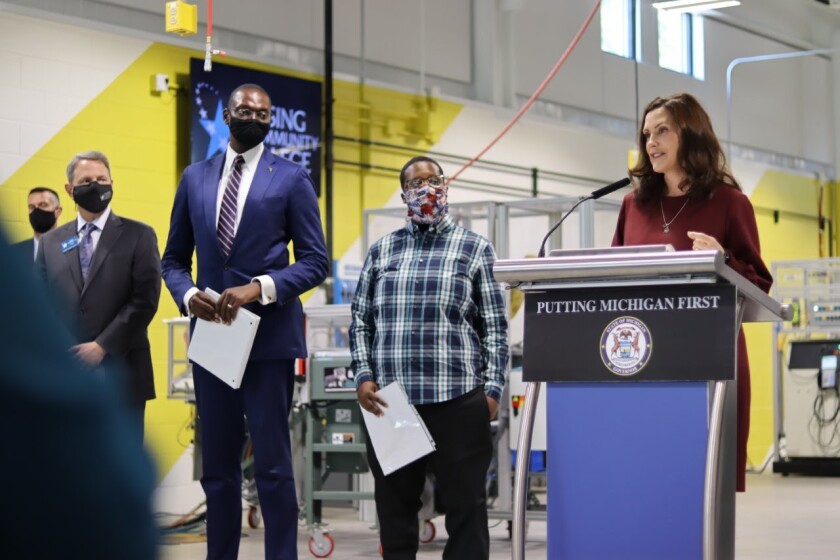 Michigan entered fiscal 2022 Friday with a new budget director and a $70 billion budget after Gov. Gretchen Whitmer signed the final pieces that were negotiated with lawmakers amid a flood of federal relief and surging state tax revenues.

Despite dealing with the COVID pandemic, recession, a divisive election and political disputes “we got a great budget done” by “finding common ground,” Whitmer said at a signing ceremony Wednesday. “This budget shows that divided government doesn’t have to be dysfunctional government.”

Whitmer is a Democrat and Republicans hold the legislative majorities. The two sides have clashed about spending issues in the past and on public safety restrictions, policies, and orders Whitmer imposed during the pandemic.

The budget raises education funding, provides nearly $200 million for repairs to about 100 bridges in weak condition, provides more funding for replacing lead pipes, and makes a $500 million deposit into the rainy day fund that restores a $350 million draw early in the pandemic. The deposit brings the balance to $1.38 billion.

The budget relies on some federal relief but decisions have not yet been made on allocating $7.5 billion as well as $2 billion in additional state funds now expected. The state headed into the fiscal year with $2 billion of remaining CARES Act dollars from its $3.1 billion allotment last year and is receiving $6.5 billion from the American Rescue Plan Act.

“With the budget out of the way, we can further collaborate to invest the billions in federal dollars we have received from the American Rescue Plan and the billions more we are expected to receive from the bipartisan infrastructure bill,” Whitmer said.

Whitmer vetoed several measures that would have impacted local county health departments’ ability to enforce orders such as mask mandates by stripping them of funding.

Rosier revenue projections helped ease tensions between Whitmer and the GOP leaders as they agreed to a budget framework in the spring.

Michigan expects a $3.5 billion revenue surge through the next fiscal year due to its accelerating economic recovery. That will allow the state to close out the fiscal year Sept. 30 with $26.31 billion in general and school aid fund revenue, up $2.04 billion from a January estimate, according to the state’s May consensus revenue estimating conference. The state also raised fiscal 2022 revenue projections by $1.48 billion to $26.8 billion and fiscal 2023 estimates by $1.8 billion to $27.7 billion.

The numbers marked a sharp turnaround from the May 2020 estimating conference, early in the coronavirus pandemic, which predicted multi-billion-dollar revenue hits as the state put together its fiscal 2021 budget.

The state’s brighter economic prospects drew two rating outlook upgrades in June when Fitch Ratings lifted the outlook on the AA rating to positive from stable and S&P Global Ratings raise it to stable from negative on the AA rating. Moody’s Investors Service rates Michigan Aa1 with a stable outlook.

Harkins, a Republican appointee who has led the fiscal agency since 2019, jumps into the new post with deep knowledge of the state’s current finances given his current role in which he serves as a member of the revenue estimating conference that sets estimates used to set the budget.

Harkins previously served in several policy and fiscal roles for the state budget office and the Michigan House. He took a break from public positions between 2016 and 2018 to work as a senior strategist for government relations at Jackson, a financial services company.

“I look forward to putting my state budget experience to work to once again find common ground with the legislature as we create another strong budget for next year,” Harkins said in a statement.

Massaron last month said he was stepping down at the end of fiscal 2021 to take the position of chief financial officer, senior vice president for finance and business operations and treasurer at Wayne State University. His selection for the top role followed a national search.

Massaron departs after less than a year at the helm of the state’s budget office. Massaron, a lawyer, was a principal at Miller Canfield before joining Detroit Mayor Mike Duggan’s administration in 2014. He held several top roles including chief operating officer and senior counsel before being tapped on an interim and then permanent basis to serve as Detroit CFO in early 2019.