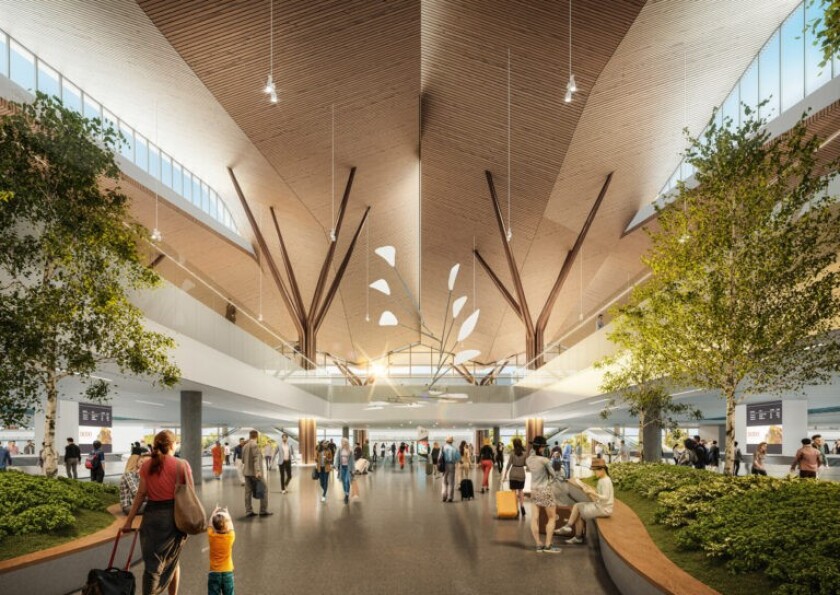 “I hear those stories all the time,” he said.

Now the airport itself is the latest example of Pittsburgh’s modernization. It is scheduled to break ground Oct. 14 for its $1.4 billion 700,000-square-foot terminal.

It will consolidate ticketing, security checkpoints and baggage claim, and add a multi-modal complex with a 3,300-space parking garage, rental car facilities and entrance roadways. The airport sits about 20 miles northwest of downtown.

Allegheny County Airport Authority, which owns and operates the airport, sold through negotiation $832.7 million of non-taxable bonds on Aug. 31 to cover two-thirds of the construction costs. Citi and PNC were lead managers for the sale.

The authority expects to go to the market again in the second half of 2023. Target opening for the new terminal is “very early” in 2025, according to Sprys.

“It’s a great thing for Pittsburgh,” Sprys said. “Certainly the public knows the need for a modern airport. The existing one was built in a different time.”

The sale generated an all-in true interest rate above 3% with a 10-year call of 1.88%. Rating agencies were praiseworthy, while acknowledging uncertainty related to a lingering pandemic and the risks of escalating construction costs.

Kroll Bond Rating Agency assigned an A-plus rating, citing positive passenger growth before the pandemic and the strength of the management team. The airport authority in January extended the contract of chief executive Christina Cassotis until the end of 2025. It cited the increase in flights to the airport and her management during the pandemic.

Fitch Ratings and Moody’s Investors Service rated the bonds A and A2, respectively. Fitch cited low default risk and strong capacity for payment of financial commitments while Moody’s referenced the solid market position of the airport and region, a diverse carrier base and additional non-operating revenue sources.

“The rating agencies and the airlines all have faith in our airport and our market,” Cassotis said. “These ratings prove what we all have known — this market is strong, the region is growing, and we are in an excellent position for this modernization program.”

The air travel industry still has a ways to go before normalcy returns.

“So far, the recovery has proven to be uneven by region, and uncertainty regarding a spike in COVID-19 cases from the delta variant is clouding the industry’s prospects,” said S&P Global Ratings, which does not rate Pittsburgh International. The upswing in domestic air travel over the summer prompted S&P to restore its stable outlook on U.S. airports, “even though the spread of the delta variant of the coronavirus has triggered a more cautious near-term stance.”

The authority dropped S&P after a 2019 downgrade.

Airlines serving Pittsburgh International are the primary funders of the project through a July lease agreement that will expire at the end of 2028. The agreement fully approves $1.39 billion in terminal modernization program costs. Signatories are Alaska Airlines, American Airlines, Delta Air Lines, Southwest Airlines, Spirit Airlines and United Airlines.

The authority also brings in roughly $100 million overall from non-aeronautical revenue, including funds from natural gas drilling and state gambling, plus parking and a Hyatt hotel on the airport grounds.

According to Moody’s, the airport’s annual enplanements dropped 62.8% in 2020, but have recovered to roughly 70% of 2019 enplanements, similar to the national average. “The airport’s long-term use and lease agreement provides downside protection in the event that recovery reverts to summer 2020 levels,” Moody’s said.

The authority defeased legacy debt in 2019 and has maintained stable airline rates and charges throughout the pandemic. Paying off that old debt provides flexibility for accommodating additional debt necessary to finance construction of the project, Moody’s added.

“PIT has a diverse air carrier mix, making it a strong origin-and-destination market not dependent on a single airline, and the agencies recognized those and other factors,” said Kevin McPeek, director of PFM Financial Advisors, financial advisor to the authority who assisted with presentations to rating agencies.

Officials began planning for the project in 2015 as part of a master plan that the Federal Aviation Administration requires. They decided to build a new terminal, citing cost efficiency, as opposed to upgrading deferred maintenance.

The airport opened in 1952 as Greater Pittsburgh Airport and took its current name in 1972. It replaced all the passenger facilities as part of a $1 billion expansion in 1992 designed to make it a state-of-the-art hub for US Airways, known in its earlier years as Allegheny and US Air.

Fortunes waned as US Airways struggled and filed for Chapter 11 protection. In 2003, right before it exited bankruptcy, the airline abruptly canceled its leases at Pittsburgh International. Ultimately it merged with American Airlines.

The airport over time adjusted.

“We’re no longer a hub and we embrace that,” Sprys said. “We serve business traffic, leisure travel … they’re all economic drivers.”

The new terminal — focused on passengers arriving and departing Pittsburgh — will be built adjacent to the gates and concourses, sparing passengers the tram journey from the present terminal, built remotely from the concourses in a layout designed to optimize the connecting traffic that has largely vanished.

Municipal bond analyst Joseph Krist said a new configuration makes sense, given that the airport was built for both an airline and a hub-and-spoke system now gone.

“There was always a concern about US Air’s 80% share at the old ‘X,’ but that is gone now so that removes one former credit concern,” said Krist, publisher of Muni Credit News.

“The new deal is surprising in that it seems to be being undertaken under a more traditional contracting scheme,” Krist added. “The use of a private-public partnership might have lessened the authority’s risk from cost overruns and delays. Given that airports have been one of the sectors very successfully using such a structure — the Denver situation notwithstanding — it is a bit surprising that they went this route.

“It’s good that the project is moving forward with the bid process. If the big infrastructure package does get approved, it will exacerbate the current skilled trades shortage so whatever you can get committed before those projects move, the better.”

Denver International Airport in 2019 fired its public-private partnership contractor, Ferrovial Airports-led consortium Great Hall Partners, amid squabbling between the parties over its bond-financed, $1.8 billion renovation and concession deal. To settle, that airport paid $55 million in March 2020, raising its total tab to $184 million.

Pittsburgh itself has transformed over the years, shedding the memory of soot-imposed darkness engulfing the city in the early afternoon. On the brink of bankruptcy in 2003 when its bonds were junk, the city rebranded itself around technology and “eds and meds,” tapping its wealth of institutions such as the University of Pittsburgh, Carnegie-Mellon and healthcare company Highmark Inc.

The city has received multiple bond-rating upgrades since 2003 and ended its 14-year stay in the state-sponsored workout program for distressed cities commonly known as Act 47.

The Federal Reserve is likely to hike interest rates again. What that means for you
FTX creditors list, BlockFi $1.2B exposure and new Celsius token: Hodler’s Digest, Jan. 22-28
5 Top Non-Tech Earnings Charts
What is a ‘rolling recession’ and how does it affect consumers? Economic experts explain
Common investing mistakes – part 3