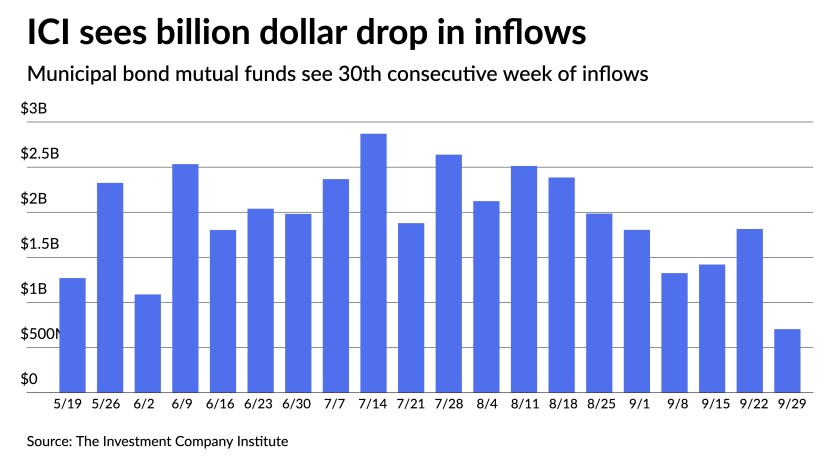 Municipals were a touch weaker as U.S. Treasuries and equities seesawed throughout the day on debt ceiling news out of Washington while new issues in the primary were in high demand and repriced to lower yields.

Triple-A benchmarks saw cuts of one to two basis points. Refinitiv MMD cut two on the 10-year and one on the 30-year while IHS Markit cut one on both maturities. Bloomberg BVAL cut its 10-year one basis point, leaving the 30-year unchanged while ICE Data Services bumped its one-year a basis point and left the rest of the curve little changed.

Another round of inflows was reported from the Investment Company Institute —the 30th consecutive week — but they were down $1.1 billion from a week prior. ICI reported $704 million of inflows for the week ending Sept. 29.

Exchange-traded funds saw $247 million of inflows after $233 million a week prior.

Participants will be watching for Refinitiv Lipper numbers Thursday as a gauge of how this week’s quieter open to the month affected investor sentiment.

CreditSights noted in a report earlier this week it is not concerned about a slowdown in flows into mutual funds, but rather a reversal of flows “because of the potential risks to secondary market prices if mutual funds are forced to sell long-duration bonds to raise cash to pay exiting shareholders.”

The average seven-day simple yield for the 150 tax-free and municipal money-market funds sat at 0.01%, the same as the previous week.

Taxable money-fund assets fell by $52.77 billion, bringing total net assets to $4.382 trillion. The average, seven-day simple yield for the 765 taxable reporting funds sat at 0.02%, same as the prior week.

In late trading, Treasuries were softer as equities were up.

Waiting on jobs data?
The Federal Reserve believes it has met its inflation goal and is close to its employment goal. Friday’s employment report is expected to be sufficient to allow the Fed to announce its plans to cut back on asset purchases when it meets in November.

The 568,000 rise in payrolls in the month “is a much welcomed positive surprise,” said Steve Skancke, Keel Point chief economic advisor. But this report and the employment report have had a remarkably large divergence, “recently so whether the September jobs number … is as positive is still a question.”

The August gain was cut to 340,000 from the initially reported 374,000, which had disappointed the markets. Economists polled by IFR Markets were expecting ADP to show 430,000 new private jobs.

With government spending and the debt cap issue still to be resolved, Skancke said “there is a lot riding” on an “equally positive” jobs report.

And while expectations are the “jobs report will clear it,” she said, “the environment remains highly unusual, and it would not be the first time a payroll report has surprised this year.”

With the Fed needing just a “good” report, it would take a major disappointment to derail “a potential November taper announcement,” they said.

As long as the report shows gains, the Fed will make a taper announcement in November, according to Bill Merz, director of fixed income at U.S. Bank Wealth Management.

The Fed will watch Friday’s job report to help determine whether the employment picture justifies announcing asset purchase reductions at its November meeting.

“Fed Chairman Jerome Powell clarified at the September meeting that substantial progress toward the Fed’s inflation goal has been met, and employment progress is expected to soon warrant reducing asset purchases,” Merz said. ”Other Fed officials echoed this sentiment last week, reinforcing the likelihood of an announcement in November.”

However, Grant Thornton Chief Economist Diane Swonk isn’t certain that a weak report would push back tapering. “What could stop the Fed from beginning to taper monthly purchases of Treasuries and mortgage-backed bonds? A failure to raise the debt limit before the Treasury runs out of funds to service the debt would likely force the Fed to intervene and buy Treasury bonds that the government had defaulted on.”

But, wage growth may be a bigger concern for the Fed, said Ned Davis Research Senior U.S. Economist Veneta Dimitrova and Chief Global Macro Strategist Joe Kalish. “Job mismatches are putting upward pressure on wage growth, particularly in lower paying industries, such as leisure and hospitality,” they said. “This may make the Fed’s job of containing inflation harder down the road.”