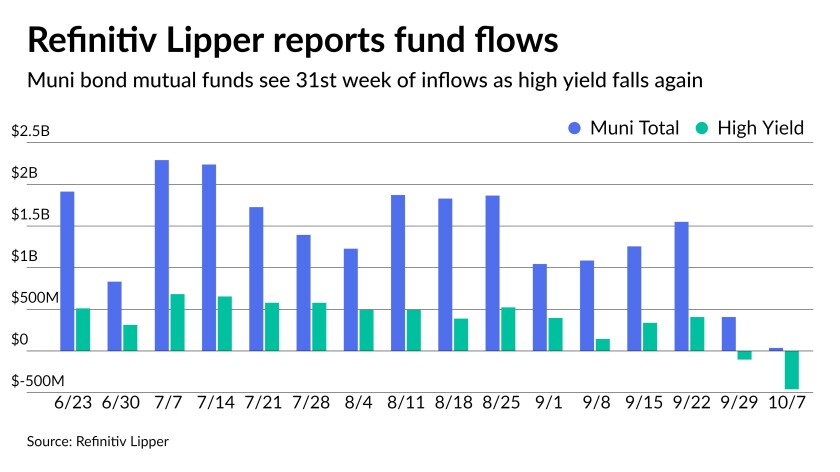 Municipals were mostly steady on a day when U.S. Treasuries sold off and equities rallied in a risk-on trade from debt-ceiling news in Washington while Refinitiv Lipper reported a mere $37 million of fund inflows and a near half-billion of high-yield outflows.

Par value posted for sale is ticking higher as sellers lock in the current yield set while they can, noted Kim Olsan, senior vice president of FHN Financial. Fund flows, she said, are correlated. Lower inflows — and potential outflows — are worth watching for any further decline and “what it might mean for new-issue and secondary inventory distribution,” she said.

The negative flow report from high-yield “is interesting but it is not enough to signal to me that there is a widespread change in sentiment,” said Patrick Luby, senior municipal strategist at CreditSights. “The recent negative flows could be a consequence of the Sept. 30 closure of Nuveen’s NHMAX to new investors — which could have led some investors to move out of HY.”

Luby also noted the two largest high-yield exchange-traded funds — HYD and HYMB — have had mixed flows the past two weeks.

“I do not believe that there is much more room for high-yield spreads to tighten further, but the higher average coupon rates (and cash flows) in the high-yield market versus investment-grade munis are likely to continue to appeal to a lot of the exiting high-yield fund shareholders,” Luby said.

The four-week moving average remained positive at $812.742 million, after being in the green at $1.075 billion in the previous week.

In late trading, Treasuries were softer as equities were up.

Is the Fed wrong about inflation?
For more than a decade, the Federal Reserve was unable to stimulate inflation to its 2% target and now inflation seems to be much higher, but the Fed is convinced that once the pandemic ends inflation will slow.

But not everyone agrees with the Fed on inflation.

“The Fed has been wrong about inflation since the great financial crisis failing to reach their 2% target despite the easiest monetary policy in memory,” said Nancy Tengler, chief investment officer at Laffer Tengler Investments. “Now the Fed is wrong again but this time to the upside.”

Transitory inflation would have disappeared in “a few months,” she said, but it’s been “stickier and higher” than expected. “Twice since spring, the Fed has had to raise their inflation expectation. And, they are still behind.”

While Fed intervention allowed the economy to quickly rebound after last year’s economic shutdown, “perhaps the Fed stayed too easy for too long,” Tengler mused. “Or, maybe Chair [Jerome] Powell’s laser focus on jobs over inflation will be a mistake of equally epic proportions. Letting inflation run hot is risky business.”

Supply chain issues “will persist,” she predicted, which will add to inflationary pressures. The drought in western states will push up food and energy prices. “Let’s not even contemplate Washington spending plans at this point,” she said.

But, the question of whether the Fed was correct about inflation “is becoming less relevant,” said Drew Peterson, vice president and research analyst at Appleton Partners, “it was predicated on a reopening economy with COVID behind us. Instead, Delta continues to depress demand at home and supply abroad.”

And with companies expected to pass along price increases, “there is a good chance PPI will flow into lingering consumer inflation as COVID continues to disrupt the global economy.”

Anecdotal evidence suggests the end of added unemployment benefits has not produced the rush of job seekers that was expected, he said.

“There is no consensus on why the workforce is failing to return to pre-pandemic levels, although BLS survey data suggests pandemic related concerns are at least partially to blame,” Peterson said.

But job cuts, as reported by Challenger, Gray & Christmas were the lowest for a quarter since 1997, said Mark Hamrick, senior economic analyst at Bankrate.

“The expected path forward for the job market and the broader economy is considered to be fairly upbeat,” he said. “Still, a higher-than-normal degree of uncertainty remains.”

And while the economy was expected to be past COVID at this point, “supply chain challenges and the Delta variant provided new plot twists which slowed the recovery,” Hamrick said.

“While there are encouraging signs on the COVID front, supply chain issues may be persistent,” he said. “The result is inflation at a higher pace than income improvement for many households, damaging to personal finances.”

Chip Barnett contributed to this report.