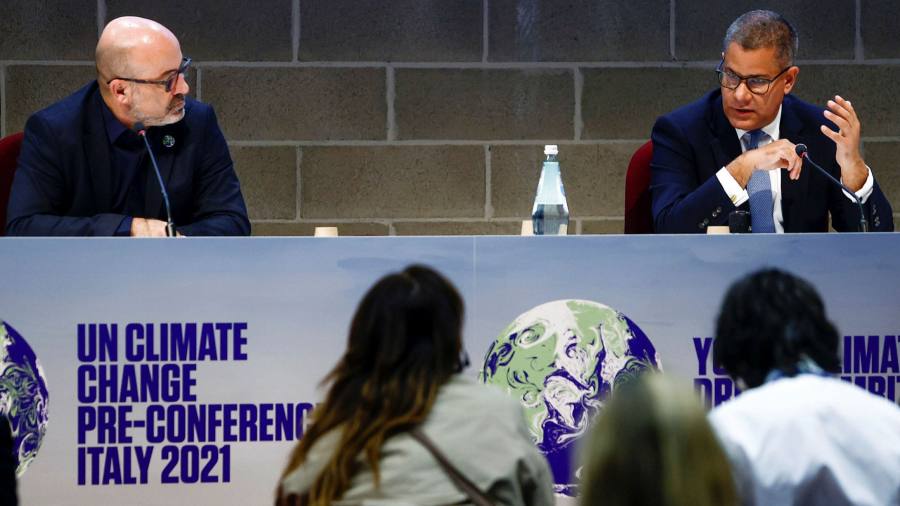 The UK’s COP president Alok Sharma has challenged China, India and Saudi Arabia to deliver on G20 promises made months ago, and come up with better formal climate targets ahead of the UN summit in November.

“To all the G20 countries who have not yet stepped forward . . . it is incumbent on them to deliver that enhanced, more ambitious [climate target] before COP,” Sharma said in an interview with the Financial Times.

With just 21 days before the COP26 summit starts in Glasgow, the UK climate chief also singled out Australia, saying he hoped Prime Minister Scott Morrison would attend in person and join the rest of the world’s developed economies by setting a net zero target.

“Australia are our closest mates, and I want them to come to our party and sing the same songs — and that means making ambitious commitments on emission reductions by 2030 and, obviously, a net zero target,” Sharma told the FT.

The UK is also calling on rich countries to step forward with more money to help meet a 2009 pledge for $100bn in climate finance for developing countries.

Out of the G7 nations, only France and Italy have not made new financial pledges for climate assistance to developing countries.

Sharma urged “all the donor nations that have not yet stepped forward, to come forward as soon as possible, and set out their increased finance commitments”.

President Joe Biden said last month that the US would double its level of climate finance by 2024, although that will require congressional approval.

About 120 world leaders are expected in Glasgow in person in early November for COP26, which comes immediately after the next G20 gathering in Rome.

The climate summit is proving to be a delicate test of the UK’s diplomatic skill and political muscle, as nearly 200 countries negotiate over the rules to implement the Paris climate accord that aims to limit global warming to less than 2C and ideally 1.5C.

Pressure has been building on the world’s biggest emitters, the G20 countries, to set an example with their own climate targets and financial pledges ahead of the event.

Although the G20 countries all promised in their July communiqué to submit new climate targets to the UN before the climate summit begins, four countries have not yet formally done so: China, India, Saudi Arabia and Turkey. Turkey made a step forward by announcing a new climate target last week, and said it would submit the formal paperwork to the UN soon.

Several G20 countries have submitted targets that are the same as, or even weaker than, their previous goals, including Mexico, Brazil and Australia.

In Australia, Morrison has been a defender of the coal industry and refused to set stronger climate targets for the country, a close UK ally that has recently tightened trade and defence ties.