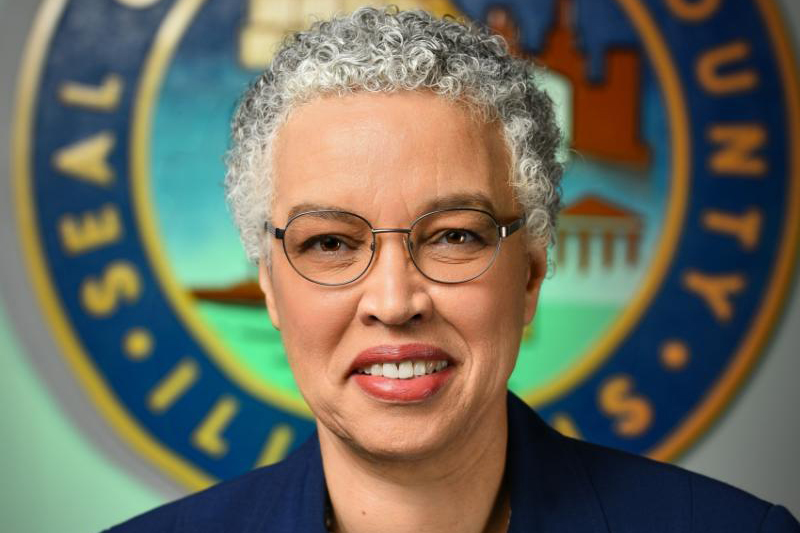 Cook County, Illinois’ fiscal picture for next year and beyond is on the upswing with $1 billion in federal COVID-19 pandemic relief and rosier revenue projections.

Board President Toni Preckwinkle Thursday unveiled an $8 billion 2022 budget package that forgoes new or higher taxes and fees, continues on course with supplemental pension contributions, and begins to spend down the county’s $1 billion of aid from this year’s American Rescue Plan Act.

Stronger than expected tax growth — especially from the online sales tax that took effect in January and cannabis taxes — along with federal relief, and holding expenses in check plugged a $121 million hole projected in preliminary budget estimates last June.

“I’m proud of our work to navigate this pandemic in a fiscally responsible manner,” Preckwinkle said. Cook County is home to Chicago and is the second-most populous U.S. county with more than 5 million residents.

New money borrowing of between $175 million and $200 million is planned for late next year under either the county’s general obligation or sales tax pledge, Chief Financial Officer Ammar Rizki said during a budget briefing.

An ordinance authorizing up to $375 million of refunding bonds in a deal planned for this year that would be led by Loop Capital Markets LLC was introduced Thursday and the county will continue eyeing refunding opportunities next year.

The fiscal landscape marks a sharp turnaround from last year when the county struggled with a $410 million gap and uncertainty over the course of the pandemic and how it might impact the performance of tourism and other economically taxes.

The budget sends a supplemental pension contribution of $325 million to the pension fund in addition to $1.95 billion in supplemental payments made since 2015 with receipts of a sales tax hike. The additional payments are on top of the roughly $200 million payment owed under a statutory formula required under state law. Another $20 million next year will go into a special pension stabilization fund.

Incorporating the extra contributions into the funding scheme puts the county on a full funding path by 2046. Without the extra infusion, the fund would be on track to exhaust all assets by 2047. The county is working with its pension fund on legislation that would build the higher payments into statute. The funded ratio stands at 63.9% compared to 53.3% if no extra payments had been made.

General fund revenues will rise by $85 million to $1.98 billion due to stronger than expected online sales as well as cannabis tax receipts, and an uptick in fee revenue from property sales and the reopening of the court system.

The county’s finance team laid out a longer-term fiscal view that shows structural clouds have lifted with revenues now expected to mostly keep pace with expected expense growth with online sales tax growth a key driver of that stability.

Gambling tax revenue joins cannabis and online sales as gainers. “Those three things” have bolstered “the revenue side of the equation,” Rizki said.

Without the online sales tax now on the books the county would have faced a $261 million structural hole in 2026. The county also now believes the healthcare fund can remain on track.

The finance team acknowledged that uncertainty remains given the summer’s uptick in COVID-19 cases due to the Delta variant that has already put in a dent in the return of some tourism traffic and trade and convention business. “That is definitely a big concern that some of those revenues ….might not come in and so we will have to adjust accordingly,” Rizki said.

The county will spend its $1 billion of ARPA relief over three years in equal installments. The budget earmarks $100 million to cover revenue losses and a portion will pay for capital projects in lieu of borrowing.

The other $233 million for 2022 will pay for a range of community, mental health, cash assistance, housing and other programs aimed at pandemic recovery with a focus on using the money for one-time allocations in order to keep a lid on structural balance.

“We will make investments that do not burden the taxpayers” beyond the five-year spend-down period, Preckwinkle said.

S&P Global Ratings lowered the county’s general obligation rating on $2.8 billion of debt to A-plus from AA-minus last year January. The outlook was revised to negative from stable in May 2020. Fitch Ratings rates Cook County A-plus with a stable outlook.

Moody’s rates the county A2 with a stable outlook. The county also has about $400 million of sales tax bonds that are rated AAA and stable by Kroll Bond Rating Agency and AA-minus and stable by S&P.

Beyoncé, a $100k-a-night suite and a red carpet of influencers: Dubai basks in its booming economy
Trading Breakouts Strategy
Unspoilt Acreage In Montana’s Big Sky Country Hits The Market For $14 Million
How to pick recession-resistant stocks
California’s demand for PABs is more than double the IRS ceiling