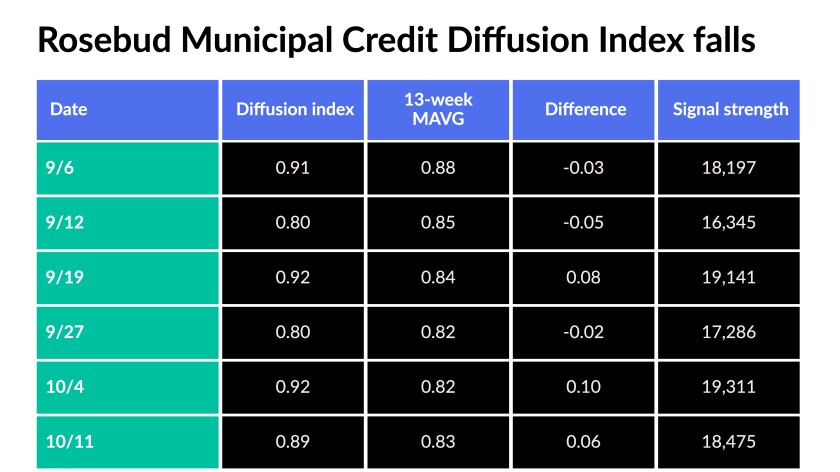 Municipals were lightly traded and little changed as participants await new issues while U.S. Treasury yields fell and stocks were in the red in a risk-off trade.

With little activity in the secondary and no large deals pricing, municipals had little direction as participants trickled back in after a long weekend.

Nuveen said because municipal rates have sold off over the past few weeks, exempts are now considered “attractive,” thus “equilibrium between buyers and issuers should be constructive through the end of this year.”

BlackRock noted high-yield fund outflows are “notable given that sustained high-yield outflows have historically been a precursor for the broader market.”

BlackRock said it has shifted to a neutral stance on duration with a barbell yield curve strategy. “We prefer lower-rated investment grade bonds, particularly in the front-end of the yield curve, as well as select high-yield credits,” the report said. “We maintain a favorable view on the tax-backed, transportation, and healthcare sectors.”

“Should the index stay above the moving average and 12-month trend on a sustained basis, it would signal a trend toward increased market perception of credit risk,” said Christopher Mier, founder of Rosebud Strategies.

The index has remained below the 1.00 level since June 28.

The signal strength fell by less than one thousand mentions, or 4.2% of the previous week’s strength.

In late trading, Treasuries were better as equities fell.

Stagflation talk
With inflation and unemployment at higher-than-normal levels, the word stagflation has been resurrected after decades of dormancy.

Answering questions following a speech Tuesday, Federal Reserve Board Vice Chair Richard Clarida said he doesn’t expect stagflation to be a problem. The stagflation in the 1970s, he said, resulted from Fed monetary policy mistakes, which will not be repeated.

Wells Fargo Securities Chief Economist Jay Bryson, Senior Economist Sarah House and Economic Analyst Hop Mathews agree that stagflation is unlikely. “Even if ‘stagnation’ is interpreted as an extended period of sluggish economic growth and elevated unemployment, we do not believe that the current economic environment meets this definition, as growth is anticipated to remain above trend,” they said.

Inflation and unemployment should both “recede,” thereby eliminating the possibility of stagflation.

And while much of the inflation seen to date can be considered “transitory,” Don Rismiller, chief economist at Strategas, said it is “surprising how long those bottlenecks are lasting (and in some cases even intensifying). We expect many to persist into and through 2022.”

These supply shocks are pushing up inflation expectations, “which can contribute to a self-fulfilling cycle for inflation.”

Of concern are “some key components, like rents,” which are rising, Rismiller said.

“Rental inflation is closely correlated to the labor market; as permanent job loss has come down, rental inflation has picked up,” he said. “This series doesn’t bounce around a lot like some do — so when you get a turn, it tends to be durable.”

Federal Reserve Bank of Atlanta President Raphael Bostic also addressed inflation in a Tuesday speech, suggesting “episodic” might be a better description than “transitory,” since the latter suggests a timeframe and “it is becoming increasingly clear” that the feature of the pandemic causing these price spikes “will not be brief.”

He suggested episodic means “these price changes are tied specifically to the presence of the pandemic and, once the pandemic is behind us, will eventually unwind, by themselves, without necessarily threatening longer-run price stability.”

But while troubled by the number of items in the consumer price index basket that rose more than 3% in August, more worrisome are the impacts of bottlenecks.

“The real danger, is that the longer the supply bottlenecks and attendant price pressures last, the more likely they will shape the expectations of consumers and businesspeople, shifting their views on pricing and wages in particular,” Bostic said.

On Tuesday, the Federal Reserve Bank of New York released its survey of consumer expectations, which showed inflation expectations at the highest level since the series began in 2013.

One-year inflation expectations rose to 5.3% in the September survey from 5.2% a month earlier, while the three-year jumped to 4.2% from 4.0%.

Turning to monetary policy, Bostic spoke about the 2% inflation goal and overshooting it. “If highly accommodative monetary policy is meant to correct past inflation shortfalls, then we have accomplished that mission,” he said.

While 2.25% average inflation over a six-year period wouldn’t be a concern, Bostic said, “Where I get concerned is if the trajectory of inflation is steep and appears likely to be persistent enough to risk unanchoring long-run inflation expectations.”

He believes underlying inflation has surpassed 2%. “I think inflation is likely to remain above 2% going forward. How far forward I cannot say,” Bostic added. “But upside risks are salient. I believe the conditions I’ve described argue for a removal of the Committee’s emergency monetary policy stance, starting with the reduction of monthly asset purchases, as we discussed in last month’s meeting. This is our first inflationary cycle under the FOMC’s new policy framework. So it is clear to me there’s value in communicating how we gauge progress toward our inflation goals and what we view as the appropriate inflation signal on which consumers, businesspeople and markets should focus.”

Clarida said he believes the Fed is close to its employment goal, having met its price stability target. He said the Federal Open Market Committee believes if progress is as expected, tapering could soon be appropriate at a pace that cuts all purchases by the middle of 2022.

“Small business owners are doing their best to meet the needs of customers, but are unable to hire workers or receive the needed supplies and inventories,” according to NFIB Chief Economist Bill Dunkelberg.

The Health and Educational Facilities Board of the Metropolitan Government of Nashville and Davidson Counties in Tennessee ((/A+//) is set to price $113.365 million of educational facilities revenue and improvement bonds (Belmont University), Series 2021, serials 2022-2051. Truist Securities.

US economic growth slowed in fourth quarter of 2022
What is the Bitcoin Loophole, and how does it work?
Top Wall Street analysts pick these stocks to climb 2023’s wall of worry
Ciena (CIEN) and Carrols Restaurant Group (TAST): 6/18/2019 Bull & Bear
Connecticut’s fiscal 2023 revenue estimate gets a boost