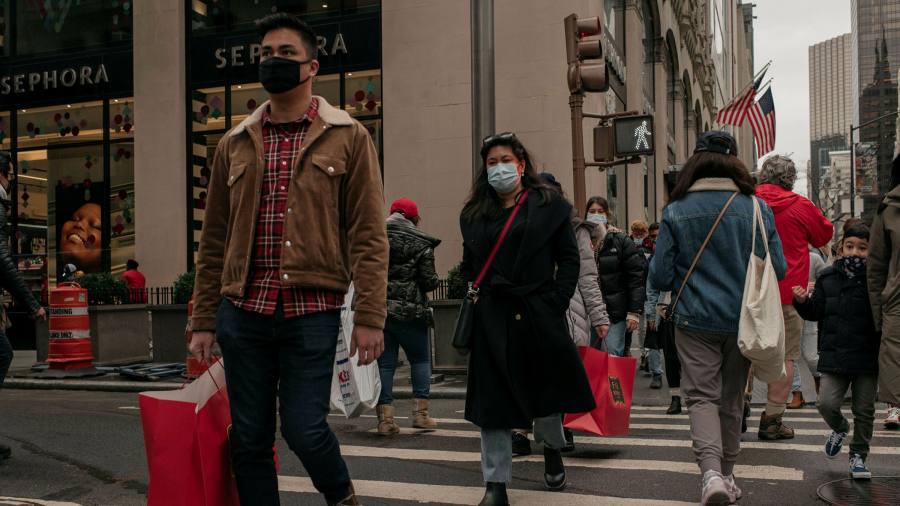 The pace of US consumer price growth ticked higher in September, hovering at a 13-year high as inflationary pressures persisted amid intensifying supply-chain bottlenecks even while several pandemic-affected sectors saw some relief.

The consumer price index (CPI) published by the Bureau of Labor Statistics on Wednesday rose 5.4 per cent in September from a year ago, slightly higher than the annual increase reported for August. Analysts had expected a 5.3 per cent increase.

On a monthly basis, prices climbed 0.4 per cent, up from the 0.3 per cent rise in the previous period.

Stripping out volatile items such as food and energy, “core” CPI ticked up 0.2 per cent from August. That compares to the previous month-on-month increase of 0.1 per cent, and maintains an annual pace of 4 per cent.

Economists and policymakers have debated at length the extent to which ongoing consumer price increases will shift to more persistent inflation that broadens out beyond sectors such as used cars and travel-related expenses. These sectors are most sensitive to pandemic-related disruptions and have so far driven the bulk of the increases.

Prices for used cars and trucks once again declined, falling another 0.7 per cent in September after a 1.5 per cent decline the month prior. For the year, however, prices are still up 24.4 per cent. Airline fares saw another steep drop, decreasing 6.4 per cent over the month after falling 9.1 per cent in August.

The pace of that growth cooled off substantially in August, but pricing pressures are beginning to broaden out — a dynamic that Raphael Bostic, president of the Atlanta branch of the Federal Reserve, and other officials have noted.

While Jay Powell, Fed chair, has long stood by his view that inflationary pressures will subside over time, he acknowledged last month that the severity of the supply-chain bottlenecks that have exacerbated ongoing price pressures caught the US central bank by surprise. He also admitted that they appear to be getting worse.

His warnings were echoed by Gita Gopinath, chief economist at the IMF, who told the Financial Times this week that central banks needed to be “very, very vigilant” when it came to inflation risks.

The latest data came on the cusp of a policy pivot from the Fed, which is gearing up for a reduction or “taper” of its $120bn asset purchase programme.

Bostic told the FT on Tuesday that the process should begin next month and wrap up entirely by next year in order to give the Fed space to raise interest rates if necessary.

Richard Clarida, Fed vice-chair, also signalled his support for that taper timeline at an event on Tuesday, but reiterated that the move to wind down the stimulus had little bearing on when interest rates may rise.

An increasing number of officials now see an adjustment as early as next year, with at least three rate increases pencilled in before the end of 2023.