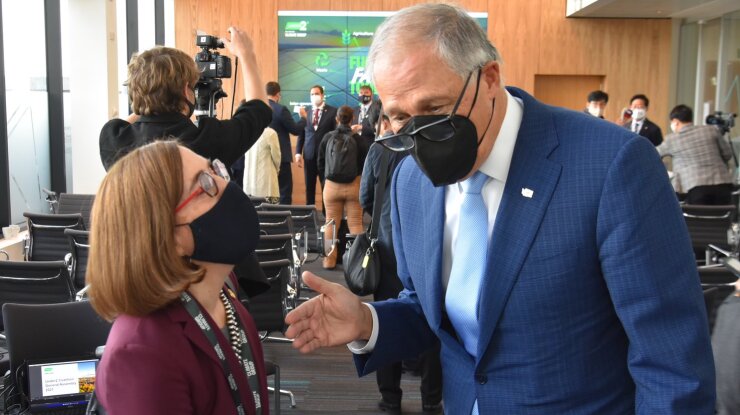 Oregon economists predicted both moderate revenue growth and the possibility of a recession during their September forecast.

Economists told lawmakers this week that either way the heady days of overflowing coffers are over.

Under the rosier outlook, residents get that kicker rebate if the state forecast of $600 million more revenues than what was forecast for the current two-year budget cycle just three months ago is achieved. That would result in Oregonians receiving $3.46 billion back in the form of the kicker, the unique Oregon policy that returns personal income taxes if they come in at least 2% higher than initial forecasts.

Gross general fund revenues for the 2021-23 biennium are expected to reach $27.8 billion. This represents an increase of $601 million from the June 2022 forecast, and an increase of $4.5 billion relative to the close of session forecast.

On the flip side, if the state goes into a recession, the heady days of ever-rising revenues that has been the status quo for the past several years could come to an end. If that happens, no kicker rebate.

The state holds a Aa1 rating from Moody’s Investors Service and a AA-plus from S&P Global Ratings and Fitch Ratings. All assign stable outlooks. The state had outstanding long-term debt of $11.29 billion as of June 30, 2021, according to a report issued by the state’s debt policy advisory commission in January.

Even if the country — and state — don’t experience a recession next year, economists said revenue is expected to slow after sky-high growth for the past several years.

“Even if we don’t go into a recession, unfortunately not all of this revenue boom is sustainable,” Oregon economist Mark McMullen told lawmakers. “We are due for a hangover.”

The short-term revenue outlook, however, is positive, according to McMullen and state economist Josh Lehner.

Taxes on business income and gains realized in the stock market have not slowed, and personal income taxes are still strong.

The more optimistic scenario is less bullish in future years when it predicts revenue growth will be much slower than expected in May. Economists now say each of the next three two-year budget cycles could see revenues more than $600 million lower than projected earlier.

Just as likely, economists said, is the possibility that Oregon will enter into a “mild recession” toward the end of 2023. The risk, Lehner said, is that surging wages driven by an unsustainably hot labor market will continue to drive inflation, which could prompt the Federal Reserve to further increase interest rates, triggering a downturn and a big increase in the state’s low unemployment rate.

“We need to see the labor market cool,” Lehner said.

Oregon Gov. Kate Brown decided to look on the bright side with the state’s September revenue forecast.

“Thanks to the fiscally responsible decisions the state of Oregon has made over the last several years, we are well positioned with significant reserves to weather any economic challenges that lie ahead,” Brown said in a statement. “With rising costs of living continuing to impact Oregon families and businesses, the Legislature can, in the budget for the next biennium, build on the investments we made in the last session — particularly in housing, workforce development, behavioral health, and child care.”