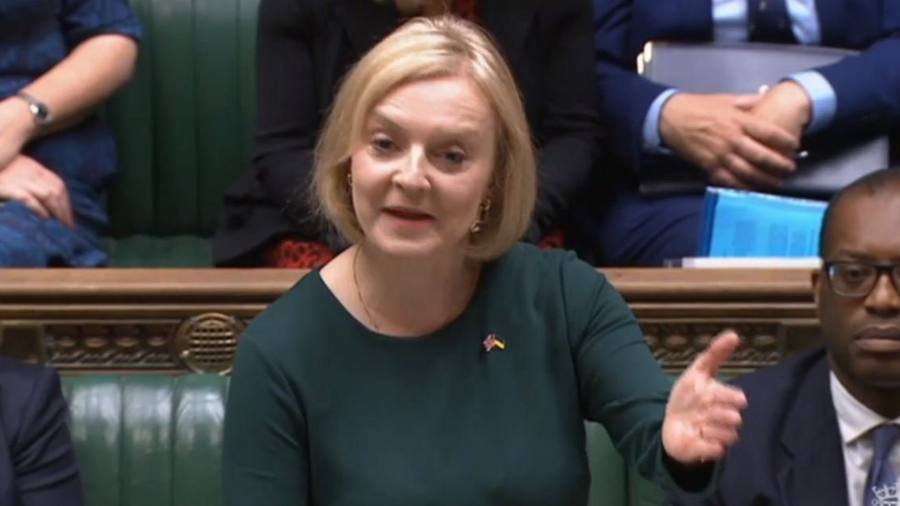 The dramatic state intervention was accompanied by promises to increase domestic oil and gas production — including fracking for shale gas — and reforms to the energy market.

An “energy price guarantee” will limit average annual household bills to £2,500 over the next two years. The price guarantee will apply to the unit cost of energy so the amount any household pays will vary depending on how much gas and electricity they use.

The maximum amount for typical household energy use had previously been due to rise to more than £3,500 in October with some projections showing that bills would have topped £6,000 next year.

A previously announced £400 energy bill discount will be retained and green levies costing £150 will be temporarily removed, meaning that average household bills will remain at roughly their current level of £1,971.

Businesses and public sector bodies like schools would receive “equivalent support” to households — but only for six months. Details of the commercial scheme are less clear.

After the six months, Truss said that ongoing support would focus on “vulnerable industries”; a review would decide which businesses should be targeted. That review is likely to be highly contentious.

“Extraordinary challenges call for extraordinary measures, ensuring that the United Kingdom is never in this situation again,” Truss said.

She also announced a £40bn liquidity facility to help energy companies deal with volatility in response to their request this week for government help to deal with a potential cash flow crisis. Electricity generators have faced a sharp increase in the amount of money they need to post as collateral for hedging future production.

Governments in Sweden, Finland and Switzerland have also announced emergency liquidity support for electricity companies to prevent the cash crunch from paralysing power markets and spilling over into the financial sector.

British government officials declined to say what the gross cost of the intervention would be, although internal estimates have put it at about £150bn, including £90bn for the household element. But it could be much higher, with the taxpayer massively exposed to rising wholesale gas prices.

Downing Street said details of the costings would be set out by chancellor Kwasi Kwarteng at a mini-Budget later this month, arguing a full assessment was needed of the effect on the overall economy.

Truss’s allies insisted the net cost of the package would be “well south” of £150bn, because the reduction in energy bills would knock up to 5 percentage points from inflation, cutting government debt costs.

Lowering inflation by that amount would reduce the immediate debt interest costs by £25bn this financial year, but would not have any lasting effect on debt interest payments.

Truss also wants to negotiate cheaper long-term energy contracts to reduce the cost of the government intervention. “The total costs of the support to households and customers will be significantly defrayed,” said one ally to the prime minister, seeking to reassure markets.

The government’s huge intervention is intended to create certainty until 2024, the expected year of the next election. It will fund the package through borrowing, rather than asking energy companies to contribute through higher windfall taxes — a policy advocated by the Labour opposition and being pursued by the EU.

Financial markets will watch the Bank of England’s actions closely after such a large stimulus.

Although the bank’s chief economist said on Wednesday that extra government borrowing and spending would likely lead to higher interest rates, traders were surprised at the reluctance of Andrew Bailey, BoE governor, to take a tougher stance. They sold UK assets, sending the pound down against the dollar, nearing its weakest levels since 1985.

Truss insisted in a House of Commons statement that she would undertake longer-term reforms to try to avoid a repeat of the current crisis.

The energy market will be reformed and its regulation reviewed.

Truss also hopes that her planned new long-term contracts with energy generators will break the link between the price of electricity and wholesale gas prices. Some companies generating power only using nuclear or renewables are currently making huge profits because of the link to gas prices.

But offering nuclear and renewable companies long-term contracts in return for lower prices today will raise the expected cost of power over the remainder of the contract.

Licensing of new North Sea oil and gas projects will also be accelerated and a moratorium on fracking for shale gas will be lifted — to the delight of the Tory right — but only if local communities support the idea.

Kwarteng wrote in May that even if the fracking ban were lifted it “would take up to a decade to extract sufficient volumes” while causing damage to the countryside.