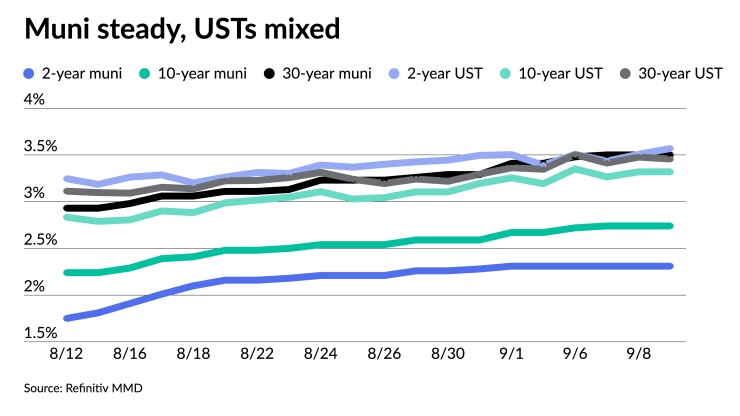 Municipals were steady Friday ahead of a new-issue calendar next week at $6.6 billion, while U.S. Treasuries were weaker five years and in and equities rallied.

“While the U.S. economic data remain relatively strong, this hawkish tone continues to put pressure on Treasury rates, which have moved higher by 10-15 basis points this week, more so in the front end,” according to Barclays PLC.

Compared with the mid-August levels, they noted that ratios “are substantially higher, especially for shorter-dated maturities.”

“Treasury rates are closing in on their June peaks as the Fed ups its QT to the cap of $95 billion per month,” with muni rates following, said BofA strategists Yingchen Li and Ian Rogow. “The only difference lies between how the two curves twisted in the ’non-recession’ environment.”

“The directions of SIFMA and short AAA coupon bonds have reversed in the past three weeks,” Barclays strategists said. The SIFMA Index is at 1.39% after reaching a peak of 1.89% on Aug. 10.

The SIFMA index has ”rallied more than 40 basis points since mid-August, while yields of short bonds have increased about 65 basis points, resulting in a more than 100 basis point underperformance for the latter in less than one month,” they noted. Shorter-dated bonds are starting to look more interesting to at current levels.

They are cautious on all risky assets in the next one to two months, “but with taxable muni spreads not far from the lows reached in early summer,” they are especially cautious with this sub-municipal sector. “If corporate spreads continue to widen, taxables will follow,” they said.

However, they said there is a difference between this time and May, as “investors do not seem to have the urge to sell as evidenced by very light secondary market trading volumes.”

This is because “the primary market is lighter in September and fund outflows are much lighter than in May” and “dealer inventories are at a very low level — just like in the beginning of the year,” Li and Rogow said.

“Since which Fed meeting is the second-to-last hike is not known currently, we believe holding positions and hedging dynamically are more appropriate until at least next week’s CPI report,” or even to the Fed meeting on Sept. 21, ”while keeping in mind that the pivot time is moving closer,” they said. New purchases should be focused on high grades and high coupons, they said. Ratios in the long end remain cheap to Treasuries.

For trading accounts with short horizons, deep discount bonds “are not necessarily something to fear as such bonds’ durations are more stable and thus easier to hedge,” Li and Rogow said. Some of these bonds are discounted beyond their fair values and “deserve to be looked at should extreme multi-year bearish views turn out to be excessive.”

Investors will be greeted Monday with a new-issue calendar estimated at $6.559 billion.

There are $5.117 billion of negotiated deals on tap and $1.443 billion on the competitive calendar.

Los Angeles leads the competitive calendar with $389 million of taxable GOs, along with $264 million of revenue bonds from the California Department of Water Resources and $100 million of GOs from Norwood, Massachusetts.