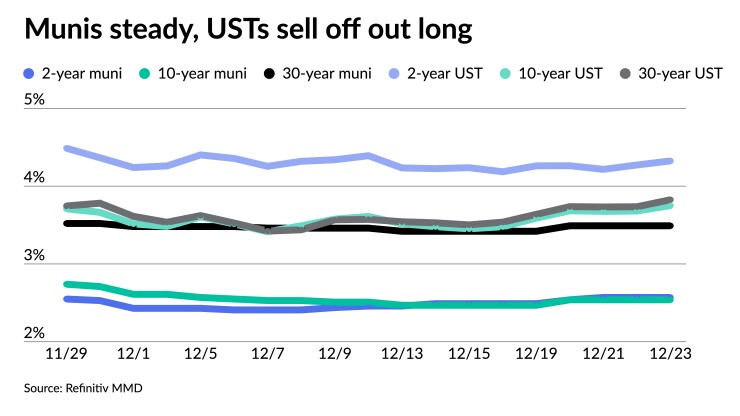 Municipals were steady Friday ahead of a week with no new deals slated. U.S. Treasuries sold off out long and equities were up near the end of the session.

Looking ahead to the first quarter, he expects a brisk pace to follow the holiday lull.

“January returns are anticipated to be slightly positive given the heavy cash hitting client portfolios on the first and 15th of the month,” he said.

“From a macro standpoint, 2022 basically saw the unwinding of the asset valuation bubble created by easy money by the Federal Reserve and overly stimulative fiscal policy in 2020 and 2021,” according to a DPC Data report.

“Who would have thought the lockdown would turn into a boon for internet sales and speculative stock trading; that it would upend the existing work and commute model in a way that’s still playing out all around the country?” the report asked.

The report said, “What started out as defensive recovery measures in response to the COVID-19 outbreak became a massive net stimulus effort,” noting “the disruptions related to a globalized supply chain” created a “recipe for a significant spike in inflation.”

“The Fed had no choice but to press the ‘reset’ button and raise rates aggressively for the past three quarters and probably well into the first half of next year,” the report said.

“The federal government has, to date, allotted more than $800 billion in pandemic relief aid to state governments, across the six pieces of legislation passed” in response the pandemic,” the report said.

“More importantly, $307 billion consisted of flexible funds that states could use at their discretion,” the report noted. “Admittedly with 20/20 hindsight, this massive federal aid was simply overkill.”

States and local governments, the report said, ended up “footing some of the bill for the federal largesse, through a much higher cost of capital resulting from the Fed tightening cycle.”

“At the end of the day, this year’s market sell-off sets the stage for a potentially more rewarding 2023, particularly in the second half,” the report said.

“The investment case for high-quality municipals is already quite appealing, based on higher tax-equivalent yields and wider quality spreads,” according to the report.

“It certainly wasn’t a coincidence that the explosive November rally started when double tax-exempt yields on high grade paper crossed the 4.00% mark, for a taxable equivalent yield in the 6%-7% range depending on the state,” the report said. “There is ground for cautious optimism going into the new year.”

Indicators
Economic data was plentiful on Friday, but none of the data suggested the Federal Reserve will pivot from its current stance.

“The second round of data was rather upbeat as consumer sentiment improved and inflation expectations dropped even further,” said Edward Moya, senior market analyst at OANDA. “New home sales also unexpectedly improved, but no one is betting that the bottom is in place.

“Disinflation trends are firmly in place after durable goods orders slumped and as personal spending softened,” he added. “Demand destruction should only continue and that will be well received by the inflation fighting Fed.”

“The durable goods data shows that higher costs of capital and persistent inflation continue to pressure the manufacturing sector,” according to José Torres, senior economist at Interactive Brokers.

University of Michigan consumer sentiment rose to 59.7, while the present situation index slipped to 59.4 and the expectations index grew to 59.9. But the report’s one-year inflation expectation slid 0.1-point to 2.9%, its lowest read since June 2021.

“The Fed’s tightening path is getting vindicated here as the narrative that personal and business spending will continue to slow appears to be firmly in place,” Moya said.

Jay Hatfield, CEO at Infrastructure Capital, believes future reads will also ease, with PCE reads dropping below 3% in the middle of next year.

“We are optimistic that PCE core inflation will decline faster than CPI as the lagging shelter component of CPI is 33% while shelter is only 16% of PCE,” he said.

“The Fed continues to try to manage the economy based on lagging indicators such as the labor market and inflationary expectations vs. the critical leading indicators of inflation including the money supply, the housing sector and energy and commodity prices,” Hatfield said.

Had the Fed used Infrastructure Capital’s “real time inflation indicator,” he said, it “would have started tightening policy in late 2020 as inflation in the housing market started to skyrocket.”

If the core PCE gain of 0.2% is not revised, they said, December PCE would need to jump 0.6% to meet the Fed’s 4.8% forecast for 2022. “This magnitude of reacceleration in core PCE inflation is unlikely and raises the probability the Fed will opt to nudge down its inflation forecasts when it issues its next set of economic projections.”

“The PCE data implies that higher interest rates, inflation and uncertainty about the economy have prompted caution at the cash register,” Interactive’s Torres said. “This trend may help Americans improve their financial health and spending power, which over the long term is positive because consumption represents approximately 70% of U.S. GDP. The minimal increase in spending is also encouraging for the inflation outlook because it shows that higher interest rates are helping to curtail demand.”

Christine Albano contributed to this report.